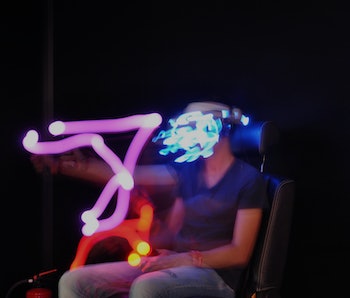 Virtual reality, we’re told, is the next big thing for video games. Maybe even the promised final form that the supposedly “young” has been evolving toward (or would have been if that’s how evolution worked). But VR is sucking all the oxygen out of a room that just got oxygen pumped into it for the first time. People had really just started to acknowledge games as art and the arrival of the Oculus Rift means that we’re going to go back to talking about games as engineering. “Immersive” will cease to be a synonym for “entrancing” and become a technical distinction.

Sure, technology can aid story telling, but it can’t replace it and it can become a barrier to entry. So let’s talk about the Rift’s price tag.

$600 is more than any other new consoles and that’s not counting the PC necessary to run the thing, which will, at least, be able to do much more. This immediately prices out, well, anyone who’s not already firmly on-board or has large amounts of money to spare. And the Oculus people know that. Or at least they did, once upon a time.

Though new technology tends to get cheaper, this tag is a reminder that new technologies are an old phenomenon and that they’re historically likely to let gamers down while embracing new, untested and likely mediocre IP. The Oculus, which obviously has many uses beyond gaming, is being billed as the new thing for gamers. There is value in that, but maybe not that much.

I would argue that the most fascinating game of the past five years was Paradox’s Crusader Kings 2. This is a game about dynastic politics, about medieval conquest, about keeping rebellious vassals and bishops happy. It’s basically a Game of Thrones simulator without dragons (unless you download the Game of Thrones mod, which adds dragons and Westeros).

What on Earth can virtual reality do for a game like this? Make reading the menus easier? And it’s not just strategy games that won’t benefit from VR. If the stated goal is immersiveness, RPGs present a very real problem (one, it’s worth acknowledging, a god-like view might solve).

VR also attempts to make game worlds literal — “you are actually there.” But games have benefited greatly from deploying abstraction. Twine games and visual novels tell their stories through words, not animation. Side-scrolling platformers deliberately create detached, fascinating worlds to view from a distance. And those are largely small-budget, accessible types of games. VR helps none of these. Even big-budget games benefit from layers of abstraction. The Witcher 3 and Mass Effect both do better because they separate the player from the player character: I’m not Geralt or Shepard, I’m a player making Geralt or Shepard’s choices. These are some of my favorite games — in fact, most of the previously-mentioned genres are my favorites.

On the other hand, Virtual reality helps a very specific set of games. Horror games may benefit most. Exploration games and “walking simulators” like Gone Home would be great with it. First-person shooters could benefit, although I wonder “immersed” players committing hyper-violence might be less appealing without the current layers of detachment. And there are some very cool-looking experimental, abstract VR games, like the rhythm game Pulse.

But this ends up looking more like the last great supposed technological advance, motion controls. Those were supposed to change gaming in a similar fashion, by removing layers of abstractions (buttons with motion control, screen distance with VR). Some neat games came out of it, but only the kinds of games that actually fit with the technology, while the high price eventually sent the motion control industry into decline. And, as I discovered when I threw my shoulder out every time I tried to play Just Dance or NHL 2K10, there can be some very unfortunate side effects to any new technology.

I’m not an anti-early adopter. What I am is doubtful that virtual reality is going to improve the games I enjoy. It will no doubt blow minds. Mine just won’t be one of them.