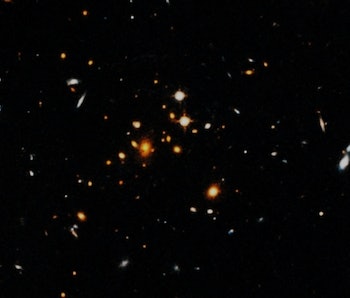 A massive, sprawling galaxy cluster over 1,000 times bigger than the Milky Way has been discovered 10 billion light years away, according to a new report.

The galaxy cluster, known as “IDCS 1426,” is thought to have formed within the first four billion years after the Big Bang, a time when the universe had just barely cooled down enough to start forming galaxies. IDCS 1426 is thought to contain thousands of individual galaxies, and it still seems to be undergoing an upheaval, scientists learned on Thursday during the American Astronomical Society annual meeting in Kissimmee, Florida (the report will also be published in The Astrophysical Journal.)

A bright bundle of X-rays slightly outside the cluster’s center suggests that its core may have shifted several hundred thousand light years from its original position in the center. The researchers suggest that it might have been dislodged from its original roost after colliding with another galaxy cluster.

Nearby clusters — study author Michael McDonald, Ph.D., refers to the galaxies within them as “cities in space” — are so massive that spotting them in the sky doesn’t usually pose a problem. It’s when you start looking further back in space and time that they become more difficult to identify.

The scientists are hoping the chaotic galaxy cluster will shed light on the ways galaxies actually form. “This cluster is sort of like a construction site — it’s messy, loud, and dirty, and there’s a lot that’s incomplete,” McDonald said in a release. “By seeing that incompleteness, we can get a sense for how [clusters] grow.”

“So far, we’ve confirmed about a dozen or so galaxies, but we’re just seeing the tip of the iceberg, really.”