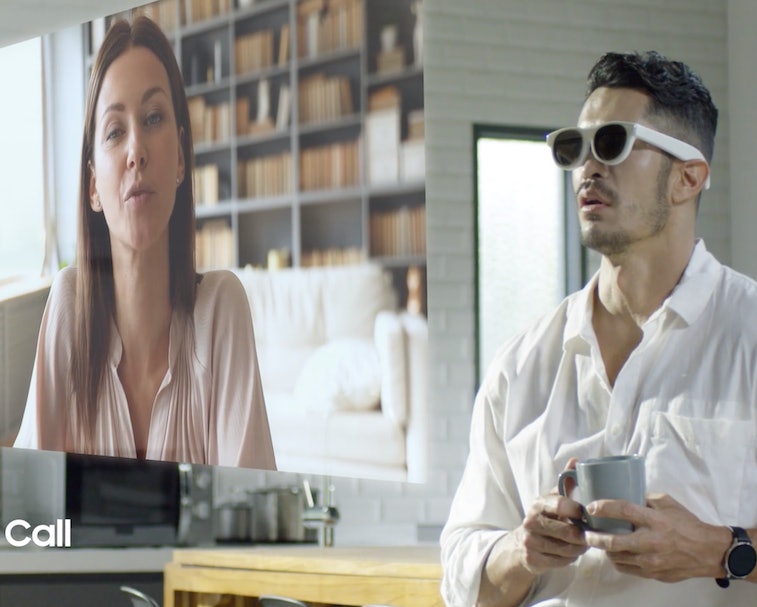 Samsung’s augmented reality glasses have been the subject of much speculation in the recent past, but the company has for the most part kept the product itself under wraps. Thanks to WalkingCat, a well-known tech leaker, we may finally have our first look at where Samsung imagines its first pair of glasses going.

WalkingCat published two concept videos this weekend for a product called the “Samsung Glasses Lite,” which appear to be exactly the AR glasses we’ve heard rumblings about at Samsung for years. The videos show off quite a few use cases for the glasses, such as typing emails on a virtual screen, watching YouTube while you lay back on the couch, and, of course, for playing video games.

The second video shows similar glasses but with the ability to render three-dimensional objects right in front of your eyes. The second pair is black, and the video calls them simply “Samsung AR Glasses.”

The glasses aren’t exactly stylish — they remind me of a pair of knockoff Ray-Bans I bought on Amazon in high school — but they do look ambitious, comfortable, and more than a little bit useful. Of course, they’re just concept videos, and leaked ones at that; it’s going to be a long time before we’re actually sporting these on Zoom calls.

A vision of interconnectivity — These are concept videos, and as such they present something of a utopic vision of Samsung’s future. The person in the video is using his Samsung Glasses Lite for everything. He’s working with their assistance but he’s also kicking back and chilling with them. It’s notable however that he does not work out in the glasses — that was Samsung’s main focus at last year’s CES.

Samsung isn’t just selling a pair of expensive glasses in these videos; it’s selling them as the logical continuation of its existing product ecosystem. You can use your Android smartwatch to scroll through YouTube, for example. This effortless synchronicity could solve one of AR’s largest problems — poor user interface experiences — while also encouraging consumers to stick with Samsung’s product line.

The race is on — We’ve yet to get our hands on any truly impressive AR glasses, but that isn’t stopping every tech company from trying to be both the first and the best. Apple’s headset is rumored to have entered the second phase of development with a release as early as 2022. Facebook’s first pair is nearing completion, and insiders say it could launch as early as this year.

In order to thrive in this rapidly expanding market, Samsung’s first smart glasses will need to be extremely competitive in terms of feature set, usability, pricing, and, of course, release date.