“Notwithstanding our interest in the space, the speculation that has ensued around our specific plans for cryptocurrencies is not true.” 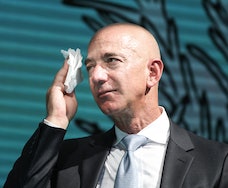 Yesterday, an Amazon spokesperson attempted to toss water on the recent dumpster fire of rumors surrounding the megacorporation’s plans to begin accepting Bitcoin payments by the end of the year. “Notwithstanding our interest in the space, the speculation that has ensued around our specific plans for cryptocurrencies is not true. We remain focused on exploring what this could look like for customers shopping on Amazon,” the spokesperson told news outlets earlier this week.

... Which, reading between the lines, ostensibly discounts nothing apart from perhaps Amazon’s overall timeline. It also does nothing to convince us that Jeff Bezos isn’t 100 percent gunning to ease his massive customer base into cryptocurrency transactions, first via Bitcoin payments before expanding to other popular tokens, with the endgame goal of introducing the world to his own native, in-house crypto. Our (figurative) money is on “PrimeCoin,” but we could be convinced of another inane moniker like “AmazonCash” or “Bezos Bucks.”

In any case, the new flurry of speculations briefly juiced the price of Bitcoin up as much as 14.5 percent to over $40,000/BTC, the highest its been in over a month... before Amazon’s attempted downplay sent the crypto’s worth plummeting below $37,000 yesterday. Bitcoin is currently hovering near $39,700 at the time of writing, barring any new fuckery from Elon Musk.

PrimeCoin is coming, mark our words — Amazon is going to accept cryptocurrency payments in the very near future; there is no way in hell it won’t. Whether that move comes in time for 2021’s holiday season or next year’s national holiday, Prime Day, is sort of splitting hairs at this point. The company has publicly posted job openings within departments like its “Emerging Digital Payments” division, as well as hired “cryptocurrency and blockchain lead” positions. These aren’t hypothetical business plans or pet projects — cryptocurrency is almost assuredly integral to Amazon’s plans for future international commerce. This is a monolithic business empire interested in advancing every aspect of deregulation while quashing centralized oversight and accountability. Bitcoin, or (more ominously) a native Prime token is a key way to further these goals while pursuing incomprehensible profits.

So yeah, sure thing, Bezos — this most recent round of “speculation that has ensued around our specific plans for cryptocurrencies is not true.” But just because it isn’t technically true now doesn’t mean it won’t be in the coming years.