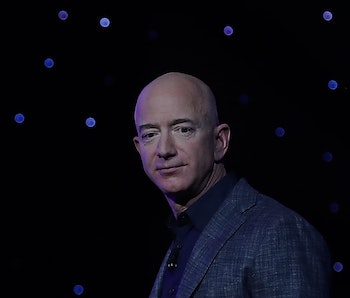 The anonymous individual who won an auction to join Amazon founder Jeff Bezos on his first flight into space is... too busy to go. This has to be one of the greatest flexes in modern history.

LOL — According to CNN, the person, who paid $28 million for the chance to participate in the historic voyage, simply told Bezos’s rocket company Blue Origin that they had a conflict in their schedule. They will be able to reschedule for a future flight, but still, you have to wonder what was so important that the individual really couldn’t go, after paying so much money for the ticket.

Maybe they forgot they had a dentist’s appointment? Drinks with the boys?

In their stead, Blue Origin will be taking an 18-year-old along, who will be the youngest person ever to enter space. There’s no telling how much he paid in the auction but he certainly earned serious bragging rights.

Billionaire’s Space Race — Adding to the indignity, Bezos will be but the second billionaire to enter space, after Virgin Galactic founder Richard Branson beat him to the punch on July 11. Jeff Bezos’s rocket company Blue Origin has discredited Branson’s trip altogether, however. In a salty tweet, it compared its upcoming crewed spaceflight on July 20 with Virgin’s.

Whereas Blue Origin’s New Shepherd rocket will fly above the Kármán line, the internationally recognized distance above Earth where space begins, at the 62-mile point, Virgin Galactic peaked at 50 miles above the Earth. But “only 4% of the world recognizes a lower limit of 80 km or 50 mile as the beginning of space. New Shepherd flies above both boundaries,” wrote Blue Origin. It even included a comparison chart showing how its rocket is better than Virgin’s. Billionaires are pettier than you might think. Hopefully Bezos isn’t too offended about being snubbed by the person who didn’t care to fly with him.

Space colonies — Besides Bezos and Branson, SpaceX CEO Elon Musk is also planning to take a trip into space — but aboard a Virgin vessel. He recently plopped down $10,000 to reserve a seat.

All three billionaires expect their respective companies to offer regular tourism trips into space, though tickets will be quite expensive and therefore reserved for millionaires and billionaires, who want the exclusive status of saying they’ve been into space.

The real, ultimate aim of these companies is to eventually conduct regular flights transporting people and goods to final destinations in space, like moon colonies. That will be more lucrative than periodic tourism trips to the Kármán line; business travel is the most profitable type of business for airlines, after all.

But space colonization remains a very far-out, theoretical idea. The environment on Mars is not exactly as pleasant as that on Earth. The fact that we’re even talking about a billionaire space race when problems like rising inequality worsen on Earth is kind of silly. Though, it doesn’t seem like Bezos would use his money to those ends even if he weren’t going to space.

At the very least, SpaceX already makes money ferrying astronauts and science payloads to the International Space Station, and delivering satellites into space. So there’s some real potential benefit to Bezos and the lot sloshing money around.