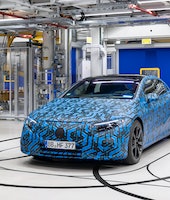 How many EVs the German automaker has in the works.

Mercedes-Benz has released new images teasing its forthcoming lineup of electric cars that will enter production starting next year. The German automaker has been a laggard in the space with zero electrified vehicles available in the United States as yet.

That's set to change as production begins on four vehicles: the EQS, a luxury electric sedan; the EQA and EQB, two variants of compact electric SUV; and the EQE, a business class electric sedan. That will be followed by SUV variants of the EQS and EQE, which will enter production in 2022.

Mercedes-Benz earlier this year teased some of the these of these vehicles in a punchy promo video.

Turning on a Daimler — In today's announcement, Mercedes-Benz describes its aggressive release schedule as a "transformation" of its global production network. The automaker is already producing batteries in three facilities, with two more locations set to begin production imminently. The new EVs will be manufactured across Mercedes-Benz's six worldwide plants, where it says it stands to benefit because it will use the same lines that it already produces combustion engine cars on.

The leader in EVs, Tesla, produces roughly 500,000 cars per year across just two factories (with locations in Berlin, Germany, and Texas, U.S., under construction). Mercedes-Benz, meanwhile, produces 2.5 million vehicles a year. If it can ramp up EV production to a similar scale it could be a force to be reckoned with in the luxury EV market.

There's not a lot to make of these prototypes as they're covered in camouflage that hides their design details. And we still don't know much about the specs such as battery capacity and what range to expect. But they'll no doubt have a solid interior in classic Merc style and include premium features that many customers appreciate and which Tesla's lack — like adjustable seatbelt heights. And, you know, Mercedes vehicles aren't plagued with all the production issues that Tesla has dealt with as it tries to learn the same lessons the legacy automakers have mastered over a century of producing cars en masse.

Mercedes-Benz might prove that waiting and watching was a good strategy. The market for electric vehicles has shifted a lot as automakers finally get aggressive about going electric — in Europe, Tesla's share of the electric market plummeted to 13.5 percent in the third quarter of 2020, down from 33 percent in the same period of 2019. Both Nissan and Volkswagen have sold more EVs in Europe in 2020 than has Tesla. And with every carmaker throwing its hat in the EV ring, Tesla's long lead doesn't seem durable.

Battery prices have come down quite a bit in recent years, however, and Mercedes-Benz will employ factories across the world for the new vehicles, suggesting it's planning for significant volume.

That's a good sign, as the lack of large-scale production made it feel like a side project for the company. But increasing emissions regulations around the world are forcing its hand as major markets commit to banning the sale of fossil fuel vehicles over the next two decades. This new lineup should be much more extensive and offer an alternative to Tesla for buyers in the premium segment. It will face a lot of competition from rival BMW, however. And Tesla, of course, isn't going to go down without a fight.