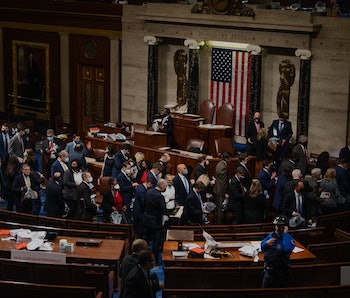 The hits keep on coming for embattled "free speech" social network Parler. After being cut off by all its service providers and taken offline, lawmakers in Congress are now asking the FBI to investigate Parler's role in the violent U.S. Capitol riots that left five dead. The request by Maloney comes as U.S. District Judge Barbara Rothstein ruled today that Amazon is within its rights to refuse hosting Parler.

Carolyn Maloney, chair of the House Oversight Committee, cited reports detailing violent threats on Parler against officials certifying the election results on January 6. The Department of Justice has arrested a slew of Parler users in wake of the attack, like a Texas man who posted threats that he would return on January 19, "carrying weapons and massing in numbers so large that no army could match them." The DOJ says that the threats were seen thousands of times.

Rekt — Conservatives flocked to Parler as mainstream platforms increasingly cracked down on misinformation and hate speech in the run up to the November 6 presidential election. Its "anything goes" mentality was all for naught, however, as unsavory content led both Google and Apple to remove its app from their respective stores, and Amazon cut off hosting the service entirely.

The social network sued Amazon last week, claiming that it was violating antitrust laws by cutting off service while continuing to provide hosting to Twitter. In her decision, Judge Rothstein concluded that Amazon is not harming the public interest because of the widespread incendiary speech present on Parler.

Two things are true — There is legitimate concern about Big Tech's power to harm competition and stifle speech, and regulation could be helpful. Apple certainly shouldn't be allowed to decide every app available on the iPhone. It can be argued Facebook should be forced to unload Instagram because it threatened to crush the app otherwise.

But you can hold both opinions: these companies are too big, and they also should be allowed to moderate what's on their platforms. It's not good for business or society to allow hate speech like what was on Parler, and Facebook shouldn't be forced to. Most of the public doesn't want to look at that, and advertisers don't want their brands to be associated with harmful content. Employees of these companies don't want to see that stuff either and have been very vocal about it.

In the end, it seems likely that a somewhat democratic form of employee activism will be what determines the content you see on major social media platforms, not just a couple of executives up top. It's been reported that Twitter CEO Jack Dorsey moved to permanently ban former President Trump after receiving a letter signed by hundreds of employees decrying his incitements of violence. That was a very extreme decision that's unlikely to happen again.

Not all hope is lost for Parler anyway — CEO John Matze has hinted that the site may come back online soon with the help of an alternative hosting provider. Even when it does, it will likely never become very big.