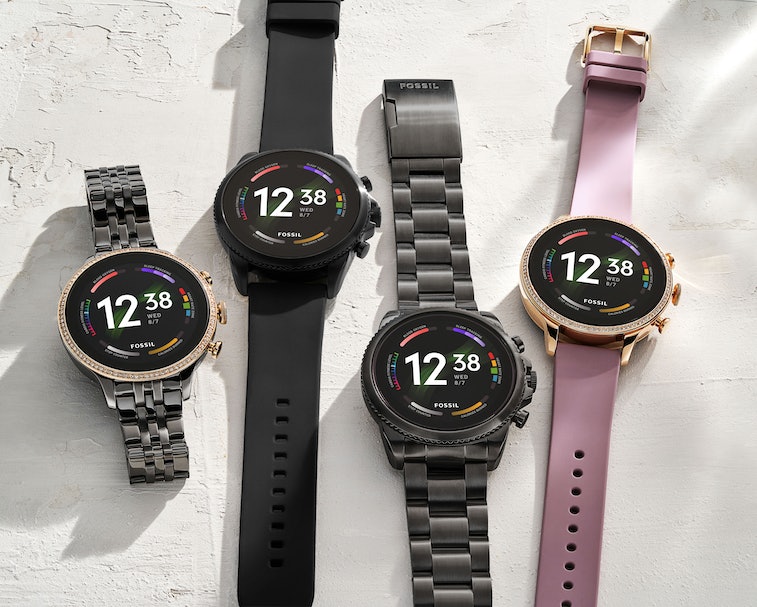 Whether you rock an Android or iOS device, the market of accompanying wearables is heating up. Fossil announced today its new Gen 6 smartwatch, packing a new processor that puts it in direct competition with Samsung’s latest Galaxy Watch 4 and positions it as a worthy alternative option for Android users.

Fossil’s Android smartwatches have always been on the trendier side of the wearables spectrum, but the upgraded internals and a promise to upgrade to Google and Samsung’s jointly developed Wear OS 3 platform in the future make the Fossil Gen 6 more than a stylish timepiece. Unlike overpriced smartwatches from luxury brands, the Gen 6 toes the line between form and function.

When does the Fossil Gen 6 come out?

Right now! You can start pre-ordering the Fossil Gen 6 today from Fossil, and it should ship by September 27, according to the company’s pre-order website.

How much will the Fossil Gen 6 cost?

The Fossil Gen 6 smartwatch is available in seven styles ranging from $299 and $319; the metal band options are on the pricier end. Fossil hasn’t announced other retail partners, but considering Best Buy and Target have carried Fossil smartwatches before, it’s probably safe to say they will likely have the Gen 6 in the future. But if you want it now, you gotta get it direct from Fossil.

How does the Fossil Gen 6 display compare to the Galaxy Watch 4 display?

The Gen 6 smartwatch has a display to compete with the big boys. Sure, it's not the Super AMOLED on the Galaxy Watch 4, and neither is it the next-gen LTPO OLED display on the Apple Watch Series 6, but it’s still an always-on AMOLED display. At 1.28 inches, it’s slightly larger than the 1.2-inch display on the Galaxy Watch 4, with a 326 ppi that’s just short of the Watch 4’s 330. Thanks to the new chip, the always-on display uses less power while also being brighter and having a wider color range.

What chip does the Fossil Gen 6 use?

The Fossil Gen 6 is the first smartwatch using Qualcomm’s latest Snapdragon 4100+ that’s based on the chipmaker’s 12nm process. Compared to the older Snapdragon 3100 chip, which the Gen 5 used, the Gen 6 offers an 85 percent increase in overall performance. This leap in performance should mean great responsiveness for things such as opening and interacting with apps. According to Qualcomm, the 4100+ chip uses dual digital signal processors (DSP) for workload partitioning, which, together with the 12nm low power process, is designed to consume 25 percent less power than its predecessor. The DSPs essentially take on some functions, such as GPS and audio, to reduce the chipset’s workload and lower its power consumption.

Alongside the 4100+ chipset is an always-on co-processor that allows more smartwatch functions to remain running in the background than the previous model. Features like heart rate monitoring and step counting won’t be affected when always-on is active.

With the 4100+ first appearing on the Gen 6 and Samsung’s Exynos W920 just launching on the Galaxy Watch 4, it’s still too soon to tell how the chips stack up. Regardless, both are using the most cutting-edge chips available for Android-based smartwatches.

The 4100+ has a quad-core Arm Cortex A53 CPU (1.7GHz), while the W920 uses a dual-core Cortex A55 (1.18GHz) that’s based on the 5nm process. While the W920’s A55 processor runs on fewer cores and has a slower clock speed than the A53 on the 4100+, it offers an 18 percent increase in performance and a 15 percent jump in power efficiency, according to ARM. Since the W920 is custom-made Samsung silicon for the Samsung Galaxy Watch 4, it should squeeze more out of the chip, with the Wear OS 3 platform lending a hand by increasing performance by 30 percent. On paper, the Galaxy Watch 4’s W920 has more going for it, but that could change when the Fossil Gen 6’s 4100 + gets updated to the newer OS.

How much storage and RAM does the Fossil Gen 6 have?

This is everything else you can expect inside the smartwatch:

How waterproof is the Fossil Gen 6?

Fossil says the watch is “water-resistant” up to 3ATM rating, meaning it can survive up to 30 meters (100 feet) of depth. The rating, however, doesn’t mean it’s waterproof and can withstand being submerged, according to watch sites and enthusiasts. If I was you, I’d take off the Gen 6 before taking a dip. If the Gen 6 had an IP68 rating, like the Galaxy Watch 4, that’d be a different story. Then again, Fossil claims the watch is “swimproof” and that it has a “swimproof” speaker and microphone. If you’re confused, you’re not alone.

Is the Fossil Gen 6 a fitness smartwatch?

The Gen 6 has all the standard sensors for tracking heart rate, sleep, and steps. A new addition to the Gen 6, however, is the SpO2 sensor that tracks blood oxygen levels. The sensor has been appearing on newer smartwatches, such as the Galaxy Watch 4; it's such a crucial feature while the pandemic is still ongoing. While an SpO2 sensor is no replacement for a doctor, it can at least give you a better idea of your blood levels and help you decide when to see a medical professional.

What’s the battery life on the Fossil Gen 6?

Though the size of the battery is not specified, Fossil claims the Gen 6 can last up to 24 hours. That depends on the use and battery mode. When using extended battery mode, Fossil says the smartwatch can go for multiple days without needing a top-up. Whether the battery lasts all day or not isn’t as important as how long it takes to charge it. According to Fossil, the Gen 6 smartwatch’s battery can get to 80 percent with only 30 minutes of charging.

Charging a smartwatch has always been an issue for me since I tend to forget to charge it so a 30-minute charge to get almost full battery is a good deal to me.

What’s disappointing is that the Gen 6 doesn’t appear to support wireless charging, a feature that I’ve come to expect and rely on. The last thing I need is another proprietary charging puck to clutter up my drawers, but it seems there’s no other choice if you get this smartwatch. The Galaxy Watch 4, on the other hand, does support Qi wireless charging.

Will the Fossil Gen 6 have Google Wear OS 3?

Yes, but not for a while. The Fossil Gen 6 will not come with Wear OS 3 out of the box. Fossil confirms the smartwatch will receive the update sometime in 2022. Depending on when exactly the update rolls out, it could be a long wait, but Wear OS 3 brings a lot of improvements that could make it worth your while. In the meantime, the smartwatch will run on Wear OS, which is an older iteration of the operating system not co-developed with Samsung. Google’s naming conventions for its wearables platform could use another pass, but the good news is the Fossil Gen 6 will be getting with the times at some point. As for other Fossil smartwatches, don’t expect an update to Wear OS 3.