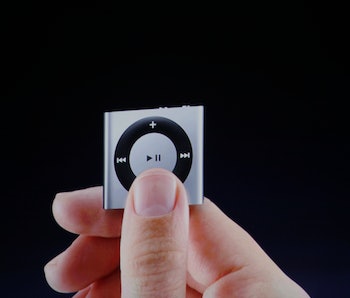 During its “Unleashed” keynote today, Apple introduced a series of new products, including an updated version of the standard AirPods and new MacBook Pros. One of the more curious announcements was a new Apple Music “Voice Plan,” which for $5 a month allows subscribers to access the streaming music service using exclusively their voice.

Throwback — The easiest way to think of the Voice Plan, as it’s called, is like a digital version of the early iPod shuffle, Apple’s defunct music player that did not feature a screen or any actual way to select specific songs. Users synced up playlists and songs on their desktop, and then simply navigated their library from the iPod by skipping forward and back.

With the Voice Plan, Apple says users will be able to call up music by asking Siri to play a specific song, or by asking it to play a series of personalized or mood-based playlists.

Apple’s announcement goes on to specify that subscribers will have access to the entire Apple Music song library, including thousands of preconfigured and personalized playlists, as well as live DJ-hosted broadcasts from Apple Music Radio. From the Apple Music app, users will be able to see a queue of recently played music and suggestions based on their music preferences. They will not be able to browse the catalog, create their own playlists, or even play music from search. You’re really going to lean on serendipity to guide what you listen to.

Surprise — Anyone who’s used Siri to play music knows that it’s a bit cumbersome, best for when you’re driving and can’t look at your phone. Since you can’t scroll through an album or explore a list of suggested playlists, asking it to play a mood or artist is kind of a shot in the dark. Hopefully, you get something good. Maybe that surprise will be enjoyable to you — or maybe you’ll just get frustrated.

It’s hard to imagine exactly who this type of offering would appeal to. For just $5 more you get access to a much more comprehensive, app-based experience. And the standard, $9.99 a month version of Apple Music includes core features not available with the Voice Plan, like offline downloads as well as Spatial and Lossless Audio. Expect that more features would be gatekept in the future. Perhaps Gen Z-ers will make it cool to use the Voice Only plan, in the same way they commonly latch onto other retro trends. The new plan will likely be appealing in more price-sensitive markets like India, where companies including Netflix offer much more affordable subscription options than found in the West.