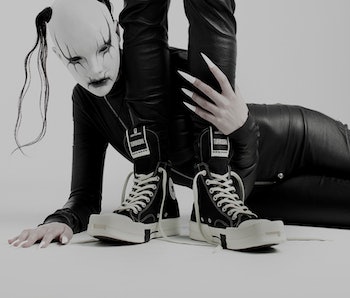 Earlier this year, Rick Owens debuted his experimental DRKSHDW take on Converse’s classic Chuck 70. Unmistakably designed by Owens, the warped sneaker featured an elongated tongue and a square-toe construction — a first for the silhouette — rightfully thrilling the fashion world.

Now, after months of silence from the collaborators, the buzz is back. In line with Owens’ punk aesthetic, a new campaign for the Converse sneaker sees it modeled with leather suits and alienesque models from multi-disciplinary brand Fecal Matter. More notably, the designer’s DRKSHDW x Converse Chuck 70 “TURBODRK” has committed to a launch date that happens to be in just a matter of days.

What to expect — Owens’ take on the Chuck 70 puts a square toe on the sneaker for the first time, while also elongating its classic shape. An extended tongue literally inches us closer to the punk knee-high Converse of the early 2010s, which may resurface later as more Converse collaborations are expected from Owens.

"I've been referencing [Converse] for years, so when they suggested a collaboration, it seemed like a good, natural thing to do," the designer told WWD in January. Now, the sneakers officially align Owens’ name with the iconic sneaker brand, with Converse and DRKSHDW branding on the tongue tag.

An all-black style, as well as a lily-white iteration, will be available in both high and low-top form, with the latter cut known as the “Ox.” All four unisex sneakers feature durable canvas uppers, double soles, and triple toe caps for the ultimate punk-rock look.

A prompt yet punk arrival — Despite telling WWD that he was “never a sneaker person,” Owens admits punk rock and The Ramones in Chuck Taylors turned him on to the category, as evident by his past design named after the band. "When I think of Converse, I think of the black and white Chuck Taylors and the punk rock generation. These have always been iconic pillars of my aesthetic," the designer says in Nike’s press release. "Wearing Chuck Taylors, you align yourself with a generation that was experimental. There is a confident dynamic to the subculture."

Owens has certainly aligned himself with the experimental generation; his distorted designs are now influencing the next one. With a limited amount of his Converse collaboration available, it’s expected each design will sell out in minutes.

The designer’s collaborative sneaker, officially known as the Rick Owens DRKSHDW x Converse Chuck 70 “TURBODRK,” is set to land on July 27 on his own website as well as Converse’s site with an expected retail price of $170.

Since the style is bound to sell out quickly, dedicated shoppers can stay updated via the Converse x DRKSHDW website, or text DRKSHDW to 75140 for a chance to be one of the first to access the collection. We hope it isn’t too long before we see more of Owen’s warped designs come out of the shadows.