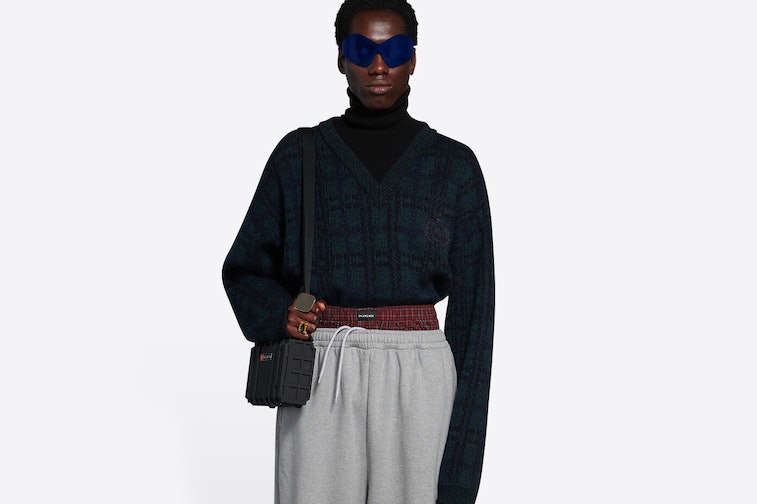 After rolling out its Fall/Winter 2021 collection, Balenciaga is being accused of cultural appropriation for a pair of $1,190 layered sweatpants that seem to imitate “sagging.”

The “Trompe-L’Oeil Sweatpants” are a basic pair of grey fleece sweats, with an exposed boxer short sewn-in above the elastic waistband. The pants were quickly called out on Twitter for mimicking “sagging,” or intentionally wearing pants low over visible boxers. The “sagging” look was popularized in the ‘90s by Black men, especially teenagers, before it eventually became a criminalized medium for racism. Several counties across America legally prohibited sagging — in Shreveport, Louisiana, Black men made up 96 percent of the “saggy pants ban” arrests.

Over the line — Extreme layering and textile-mixing has been a Balenciaga signature since Demna Gvasalia took the helm as creative director in 2017. Trompe l’oeil, which translates to “optical illusion,” is visible from Gvasalia’s double-waisted jeans to the notorious seven-layer parka. These simple sweatpants, however, seem to be an agent of gentrification rather than of creativity.

Repeat Offender — This is hardly the first time Balenciaga has been accused of cultural appropriation — it isn’t even the first time this season. Most recently, Twitter picked up on a $2,090 Balenciaga bag that bears a striking resemblance to an immigrant household staple: the market bag. In 2018, the label released a $900 airbrushed hoodie that could have been plucked straight from a ‘90s hip hop video. Two years before that, Balenciaga was under fire for releasing a line of Chinese mesh slippers.

While Gvasalia’s tongue-in-cheek irony has transformed Balenciaga’s tone since his arrival, he frequently crosses the line into appropriation — without ever acknowledging the cultural, politicized roots behind his mood board. When things like “sagging” are worn by their originators, they are criticised or even criminalized. But add a luxury label and triple-digit price tag, and the look skyrockets into mass (white, wealthy) acceptance.

Balenciaga and Demna Gvasalia have not commented on the accusations, and the sweatpants remain available for purchase.