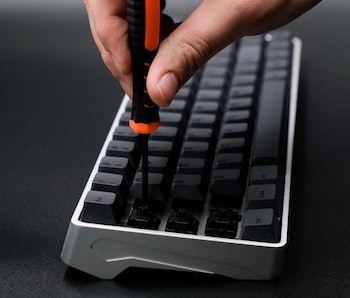 Whether you’re in an office or a library, a college dorm, or an apartment, a quiet keyboard is a must if you’re working around other people. However, anyone looking for a good typing experience knows that mechanical keyboards and quiet typing usually don’t align. In fact, most would say they’re complete opposites. That doesn’t have to be the case, though. If you’re looking to make your mechanical keyboard quieter, there are countless modifications you can do to help this out — some expected, and some not.

To figure out which mods will quiet your typing experience and which ones won’t, I looked at a variety of different sound-altering keyboard mods to gauge which ones actually made a difference. For each of these modifications, I used the most standard keyboard setup I could think of: a hot-swappable, tray-mounted 60% with an aluminum plate, aluminum case, (a setup practically identical to a standard Tofu60) and retooled Cherry MX Black switches. Through this, I was able to measure which mods made the keyboard louder, quieter, or had any other effects on the typing sound.

A thick liquid applied with a brush, meant to reduce your switches’ friction.

Lubing switches — a method we’ve written about before — is one of the go-to options for improving your mechanical keyboard. Not only can it make your switches quieter, it can also boost their smoothness and make typing way more enjoyable. However, properly lubing switches takes time and attention to detail: You can easily apply too much or too little, and it’s pretty hard to remove lube once you’ve applied it. More than that, it can be a pain if your keyboard isn’t hot-swappable, which means de-soldering each switch and re-soldering after you’ve lubed them. Because of this, the method likely won’t be for everyone, but it can make a massive difference.

A thin layer of foam that fills in the empty space in your keyboard case.

If most of your keyboard’s noise is coming from the case (which is common for linear or tactile switches, but often not the case for clickys), then installing case foam could alleviate this noise. Putting foam between the case and PCB serves to eliminate the majority of empty space in your keyboard and prevent unwanted echoing. Case foam, while easy to get, comes in countless different types.

There’s the traditional PORON foam that KBDFans uses, neoprene foam, or even Sorbothane (the most drastic option, which I have in my own silenced build). Each one alters the sound profile differently, with PORON and neoprene dampening typing sounds, while materials like Sorbothane almost completely eliminate case echo. You can likely find lighter foam compatible with your keyboard from either KBDFans or Stupidfish which are good for partial silencing. If you want to go fully silent, you’ll likely end up needing to cut the foam yourself, something that can be difficult to get perfect.

A thin layer of foam that fills in the empty space between your plate, switches, and PCB.

While it won’t provide the same sound dampening as case foam, plate foam — which goes between the plate and PCB, filling in the empty space between switches — pairs great with case foam to eliminate the majority of typing noises. The main issue is that, unless your keyboard has hot-swap sockets, you’ll have to desolder your switches to install anything between the plate and PCB. And along with that, you’ll either have to find a set that matches your keyboard, cut your own from a sheet of foam, or use modular sets.

Does it work? Sometimes

Thin sheets meant to reduce the amount of wiggle room between switch housings.

Switch films are incredibly diverse and, as a result, can have an equally diverse set of results. Each manufacturer of switch films makes them to different specs with materials; each has a different effect on your switches’ sound. More than anything else, though, the goal of a film is to reduce rattle between the top and bottom housings of your switch by reducing the wiggle room between them. While this removes some undesirable typing sounds, such as a plasticky rattle, it won’t necessarily make the switches quieter. For example, with the ones I tested, they just made the switches sound a bit cleaner and deeper than they would have otherwise.

Does it work? Sometimes

New springs affect the amount of force needed when typing and can eliminate high-pitched pinging.

Spring lube can be used to address metallic pinging.

If your switches are plagued by a constant metallic pinging, there’s a simple solution: spring lube. This can be done two ways: removing the existing springs and lubing them with spring oil, or lubing new springs and putting them into your switch housings. Lubing springs is usually either done painstakingly by hand with a brush, or (more commonly) by putting all the springs in a plastic bag, adding lube to the bag, and relentlessly shaking the bag in a process called bag-lubing. Doing this will only really make a difference if your switches are suffering from spring ping in the first place, though. If not, you’ll likely see almost no difference in your keyboard’s sound profile.

Does it work? No

Small slices of foam that go between switches and PCB.

The purpose of switch pads isn’t actually to make your keyboard quieter. Which is surprising, considering it’s foam that goes inside your keyboard. Instead, switch pads are meant to improve your sound profile, bringing it closer to a keyboard like the Jelly Epoch, which uses a thin sheet of foam between the switches and PCB. As a result, the typing has what some describe as a more “pop-y” or “ceramic” noise — meaning it’s lighter and more brief. While it can also reduce some rattle between the PCB and switches, it likely won’t make your keyboard noticeably quieter. And along with that, this mod is only recommended for hot-swappable keyboards. Soldering a keyboard with switch pads can run the risk of melting the pads and damaging your components.

Thin pads that go under the sliders of your stabilizers.

If you’ve tried tuning your stabilizers and are still getting some weird noises, then stabilizer pads could provide a solution. They’re basically a cleaner version of the typical band-aid mod, which involves cutting up band-aids and putting them under your switches. These will reduce the vibration between stabilizers and PCB and, as a result, make them a lot quieter. However, in my tests, this also made clip-in stabilizers more prone to coming unclipped when typing — something that was not good at all.

Also, as a note, these pads only work with PCB-mount stabilizers. Plate mounts don’t have the same options for modification.