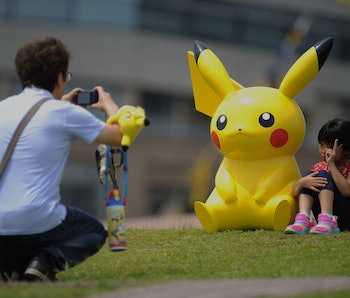 After 21 years of fans begging, The Pokémon Company today announced that the Nintendo 64 title Pokémon Snap would be getting a sequel in the form of New Pokémon Snap, coming to the Nintendo Switch. The new title is being developed by Bandai Namco Studies, not HAL Laboratories, which was behind the original.

For the uninitiated, Pokémon Snap was a spin-off title in the popular monster battling franchise that consisted of players taking photos of Pokémon in their "natural" habitats rather than capturing them, as is customary in the mainline franchise. Players traverse the landscape on rails using methods like bait to entice the creatures before the game rates their photos for points.

Travel to unknown islands with beautiful scenery like lush jungles and sandy beaches. The Pokémon pictures you take there will be used to build your very own Pokémon Photodex! This brand-new game brings the gameplay of the 1999 Pokémon Snap game for the Nintendo 64 system to life on the Nintendo Switch system with unknown islands to discover and different Pokémon to see! Photograph lively wild Pokémon in their natural habitats as you research and explore unknown islands. Journey through a variety of environments such as beaches and jungles to capture previously-unseen Pokémon behaviors. The photos you take can also be used to fill out your very own Pokémon Photodex!

After a marketing push by Nintendo and Blockbuster on the tails of the franchise's first wave of success, the game sold 1.5 million copies in its release year. The game was made available by Nintendo via its Wii U virtual console in various regions over 2016 and 2017.

The sequel has been an incredibly popular request amongst fans since the 1999 hit. It's not yet announced when the game will arrive, though it is presumably sometime before another decade passes.