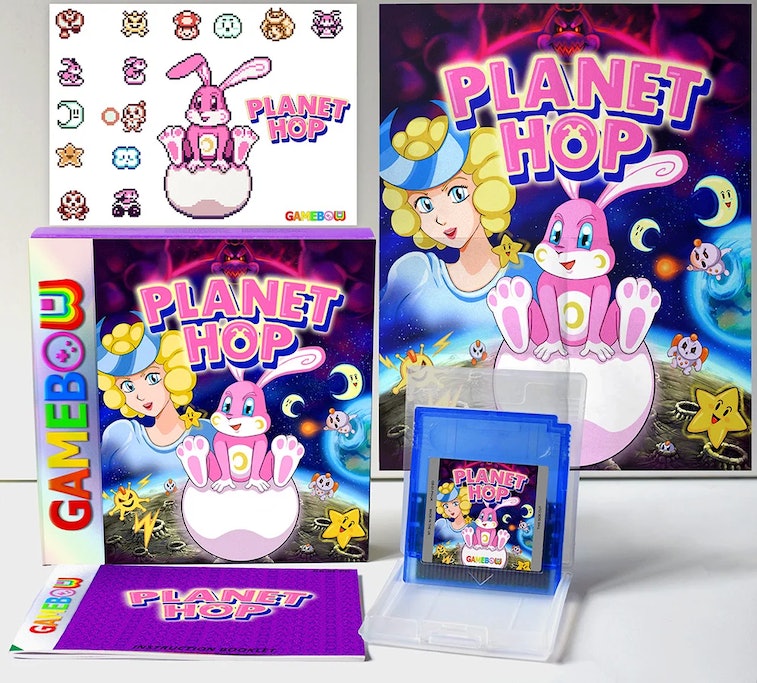 A new platformer is coming to the original Game Boy and Game Boy Color. Called Planet Hop, the family-friendly title sees you play as a pink lunar rabbit named Usagi, who must rescue the Planetary Guardians and restore the Solar System’s zodiac stars. The game is a 2D sidescroller that looks like Mario but... with rabbits.

Nostalgia — We’ve seen other developers drop new games for Nintendo’s first handheld gaming console, released all the way back in 1989. The 8-bit Game Boy had a really low-resolution, black-and-white display, making it a less than ideal platform for new games and potentially less appealing to younger players accustomed to modern consoles. But there’s certainly a nostalgia factor there for those who grew up with the Game Boy.

Full-fledged — Fortunately, Planet Hop appears to be a real passion project rather than a cash grab. The game features “at least” 72 stages across eight planets, with each planet coming with its own hazards and enemies that you overcome on your way to saving the world.

On a Kickstarter page for the game, developer Alex Watkinson says he started making Planet Hop as a collaboration with his two children before the scope of the game grew. “Unlike a lot of recent Game Boy homebrew games (that are more like demos), the game will be fully-fledged and feature at least 72 stages (spread over 8 planets) and at least 10 bosses,” he said.

Different tiers of the Kickstarter campaign will get you different versions of the game, from a copy of the ROM you can burn onto a cartridge, all the way up to pre-loaded cartridges and even collector’s versions.

Planet Hop is designed to work with the Game Boy, Game Boy Color, Game Boy Advance, as well as on emulators like the Analogue Pocket. It’s expected the game will be available around the end of 2021.