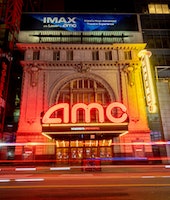 The amount of debt erased by this week's "meme stock" rallies.

GameStop's share price skyrocketed this week thanks to the absurd power of online meme economics, and while it's been front and center this week, a number of other companies are also experiencing sudden, monumental reversals of (mis)fortune. AMC, the movie theater chain whose executives were bracing investors for its imminent demise just this past Monday, is now absolved of over $600 million in debt. And this isn't subject to change for when these various stock bubbles invariably burst — that's literally hundreds of billions AMC is no longer expected to pay back.

How do you lose $600 million? — Somewhere during the recent Wall Street madness, AMC theaters got swept up in the r/WallStreetBets whirlwind, along with others massively shorted stocks like Nokia and BlackBerry, prompting a massive increase in their share prices. On Wednesday, a private equity firm called Silver Lake decided to convert its corporate bonds into AMC Entertainment Holdings stock at $13.51 a share. Look, I'm not gonna be able to explain to you exactly what that means, but suffice to say, the move eliminated over half a billion dollars in bills for the formerly terminal theater chain.

Not completely out of the hot water yet — Even that much debt magically disappearing overnight won't solve all of AMC's woes, but executives estimate the payday should allow them to weather the rest of the pandemic's worst months until people begin to return to watching movies on the big screen.

AMC will also still face a competitive marketplace, especially in places like Britain where its UK rival, Cineworld, also saw similar stock jumps of 21%. Regardless, the chain finds itself in a far better position than it did this time last week. Even when the meme stock frenzy dies down, AMC theaters might have found a way to dodge what was looking like a one-way ticket to the grave.

CORRECTION: An earlier version of this story stated the debt figure as $600 billion. It is, of course, $600 million. We regret the error.