“Musk cannot now seek to retract the agreement he knowingly and willingly entered by simply bemoaning that he felt like he had to agree to it at the time but now — once the specter of the litigation is a distant memory and his company has become, in his estimation, all but invincible — wishes that he had not.” 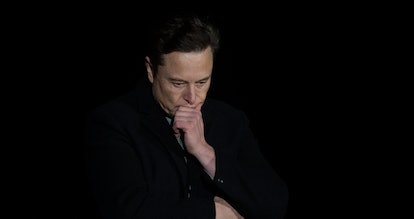 Elon Musk says he bought Twitter to ensure the internet’s horse manure-encrusted town square properly adheres to his standards of “free speech,” but if part of your job is to monitor the constant edgelord doings of the world’s wealthiest man, you’d know the “speech” in question might just entail a good amount of market-manipulating rumors and exaggerations.

On that front, a U.S. district judge unequivocally slapped down the Technoking’s request to cancel part of a 2018 settlement with the Securities and Exchange Commission that required all Tesla-related tweets first be screened by a company lawyer. “Musk cannot now seek to retract the agreement he knowingly and willingly entered by simply bemoaning that he felt like he had to agree to it at the time,” explained U.S. District Judge Lewis Liman in his written opinion. As such, Musk still can’t erroneously tweet things like “funding secured” to take Tesla private — a message that sent the company’s stock value soaring.

Still some limits to wealth — Now, to be “fair,” Musk says he bought Twitter in part because he thinks he’s doing society a huge favor (even if it’s bolstering the voices of conservative extremists on an already dangerously influential social media platform). But despite what the claim is, people like Musk don’t get to the positions they occupy because they behave selflessly or altruistically.

For one, Musk almost certainly has registered that assuming control of Twitter could help free him from SEC regulatory oversight — something that literally nobody should be above, of course. But instead, Liman states: “Musk may wish it were otherwise, but he remains subject to the same enforcement authority — and has the same means to challenge the exercise of that authority — as any other citizen.”