“...We are a respectful group of people supporting their medical autonomy and freedom of choice, and that we believe their unjust censorship policy’s on google and apple [sic] violates our constitutional rights.” 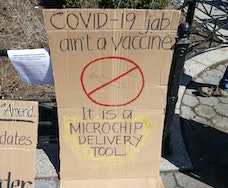 A relationship and networking app for anti-vaxxers with the infuriating name Unjected (Unjected? Like, not-jected?) has finally been removed from Apple’s App Store for violating the company’s COVID-19 policies, as well as attempting to avoid the App Store review process — which, as many are by now aware, is a big no-no for the Big Tech giant. It first debuted in May.

As Gizmodo notes, Apple made the decision after being contacted by Bloomberg for its coverage of the app late last week, citing that Unjected “inappropriately refers to the Covid-19 pandemic in its concept or theme,” while its developers “made statements externally to its users as well as updates to the app that once again bring it out of compliance.”

Advertised as “a safe space for the unvaccinated to come together uncensored through business, friendship, or love,” a brief survey of Unjected’s current state shows that its profile has also been removed from Instagram, although its official website is still fully operational. That includes chatrooms, dating profiles, and essentially an anti-vaxxer classifieds section for services like “divine light alignment,” “conscious lifestyle” coaching, and “high vibe” musicians — so, think more “earthy-crunchy woo-woo” anti-vaxxers, instead of “satanic Democrat microchip conspiracy QAnon” anti-vaxxers. Although, to be honest, we can’t decide which demographic is worse.

‘We are a respectful group of people’ — “The only statement we have is that we are a respectful group of people supporting their medical autonomy and freedom of choice, and that we believe their unjust censorship policy’s on google and apple [sic] violates our constitutional rights,” Unjected’s founders told Gizmodo in an email. Of course, being private business entities, Google and Apple are extremely within their right to remove things like Unjected’s misinformation-peddling dating site / bizarro Craigslist, so it’s unlikely we’ll see the app’s return to the App Store.

Unfortunately, as of writing this, the app is still available via Google’s Play Store, although we’ve reached out to the company’s PR and will update if given a response.

Part of a growing alt-social media ecosystem — Unjected is sadly only an extremely small part of a burgeoning alternative social media bubble for all manner of right-wing misinformation peddlers. While Big Tech has tried to rein in apps like Parler, Telegram, and Gab (oh, and lest we forget, Frank Speech), it still often feels like a losing game of Whack-a-Mole. Unjected may be a relatively innocuous example of these platforms, but the ability for these services to start up and remain active for months doesn’t bode well for cracking down on the rampant disinformation preventing a full societal recovery from the pandemic.