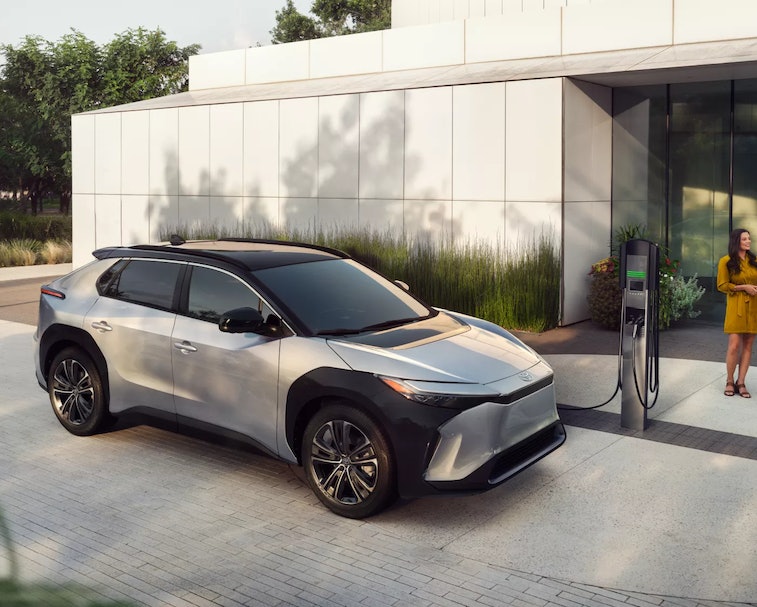 Toyota’s first all-electric vehicle, the bZ4X, is almost ready to hit U.S. roads. The funky-looking SUV was first unveiled in Japan earlier this year; Toyota has now officially announced that it will hit dealer lots in the U.S. by mid-2022.

The bZ4X is meant to be the beginning of a move away from gas-guzzlers from Toyota. The company plans to release 15 all-electric vehicles by 2025, with larger plans to offer 70 partially-electric vehicles — hybrids and battery electric vehicles, for example — in that same time frame. Toyota hopes to be entirely carbon-neutral by 2050.

The front-wheel-drive version of the bZ4X will be able to transport you approximately 250 miles before needing a recharge, Toyota says. That’s about 100 miles less than similar offerings from Tesla, no doubt the SUV’s most intense competition. Toyota hasn’t provided an estimated range for the all-wheel-drive model, though we’d expect it to get something like 50 miles less per charge, based on the range of Subaru’s Solterra, the bZ4X’s closest cousin.

Hi-tech and emotional — Toyota doesn’t just want the bZ4X to stand out from the rest of its lineup because it skips the gas. This is meant to be the SUV that launches a new legacy for the company, after all. Hence the body’s design quirks, which Toyota says are meant to fall in line with the theme “hi-tech and emotional.” The silhouette certainly distinguishes itself from Tesla’s ultra-curvy Model X.

That theme carries over into the car’s interior, too, with plenty of top-tier tech to satisfy the electric car-buyer’s thirst for modernity. There’s a large, 12.3-inch multimedia display, of course, and both USB-A and USB-C ports for charging. Over-the-air software updates will keep the car updated and running as smoothly as possible.

Consumers interested in really maxing out the SUV’s tech can opt for Toyota’s new subscription Drive Connect program. The subscription provides perks like digital keys that can be transferred between smartphones, charging station info, and real-time traffic and parking space availability updates.

The only ultra-modern perk missing from the U.S. version of the bZ4X is the steering yoke teased in the Japanese version. Sad.

All about that platform — The bZ4X bears a heavy burden. Toyota’s entry to the electric vehicle market is on the later side, and the company has big plans for the next few years. If it flops… well, it would make Toyota’s goals look significantly less achievable.

It’s also the debut of the e-TNGA (Toyota New Global Architecture) platform Toyota spent the last two years developing with Subaru. That platform is an expansion of the existing TNGA platform, which was introduced in 2015 to simplify Toyota’s lineup. It’s a five-part modular system: front, center, rear, battery, and motor.

Variations on those modules will allow Toyota to expand its EV lineup without reinventing its process with each new car. It also means this first real-life trial of the e-TNGA system could be make-or-break for Toyota’s electric future. No pressure.