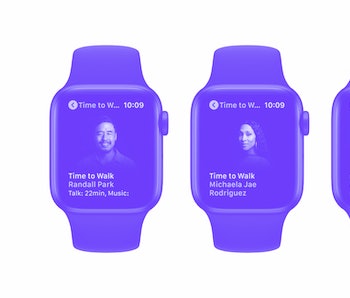 If, like me, you got hooked on Apple’s weekly “Time to Walk” episodes included with Apple Fitness+ and were sad when the insightful walk-and-talks with famous and influential people ended in April, then this is the news you’ve been waiting for: season two starts on Monday, June 28.

For season two of the surprisingly relaxing and well-produced episodic walks, Apple has recruited another group of diverse talent from a variety of different fields and backgrounds. Apple confirmed with me that there will be “over 20 episodes” — one every week from Monday through Thanksgiving in November.

Apple hasn’t announced the full roster, but gave me a sneak peek of roughly half of the upcoming hosts:

Certain episodes and their hosts will coincide with the timing of the Tokyo Olympics this summer. Athletes Joan Benoit Samuelson and Anthony Joshua, for example, will share their experiences at past Olympics.

As with season one, new episodes consist of a talk, timed photos that appear on your Apple Watch, followed by three songs chosen by the guest. Time to Walk episodes vary in length and can be anywhere between 25 to 45 minutes — they’re designed to be short and very low effort to get you moving.

With Fitness+, we’re bringing users a range of exciting new workout options, to inspire them to stay active and make fitness a consistent part of their lifestyle — whether that’s going for a walk with one of the amazing Time to Walk guests or pushing through a high energy HIIT class with Jeanette Jenkins. Music is at the heart of making workouts fun and keeping us motivated. A good playlist pushes you. That’s why our new Artist Spotlight series, where the entire playlist for a workout is fueled by a single legendary artist, will be so inviting for users to mix up their fitness routines.

Celebrity-inspired workouts — The “Artists Spotlight Series” announced at WWDC earlier this month, featuring workouts from select artists Lady Gaga, Jennifer Lopez, Keith Urban, and Alicia Keys, is also launching on Fitness+ on June 28. There will be four workouts to start. Four workouts will be released every week for a total of 16. As with Fitness+’s other music-infused workouts, Apple has tailored them to fit appropriately with the music. For instance, HIIT with certain Jennifer Lopez songs and yoga with more soothing Alicia Keys tracks.

Hello Jeanette Jenkins! — Hollywood Trainer founder and president Jeanette Jenkins, whose fitness clients have included celebrities like Queen Latifah and Pink, is the latest trainer addition to Fitness+. Jenkins’ seven workouts, also launching on June 28, will focus on HIIT and strength training. I got a preview and let’s just say her infectious smile and positive attitude are cranked to eleven in these specially produced workouts.

“My mission has been to inspire and motivate people to live a healthier life by moving more. I’m so excited to be the first featured guest trainer for Fitness+ and to work with the amazing team of Fitness+ trainers to help more people close their rings with these inclusive workouts,” said Jenkins.

Still no Fitness+ for Mac — Apple Fitness+ works on iPhone, iPad, and Apple TV. When the service launched last December, the Mac was curiously omitted. With MacBooks, the Mac mini, and the iMac now powered by Apple’s own silicon, Apple’s platforms have never been more unified.

I’m aware that you can AirPlay an iOS device over to a compatible TV or even a Mac (running the new macOS Monterey). And I’m aware that this workaround doesn’t display the real-time workout metrics on screen. But a lot of people own MacBooks or iMacs, and for them, it may be their main or only screen. I’d love to see Fitness+ come to Macs. It feels like a missed opportunity right now.