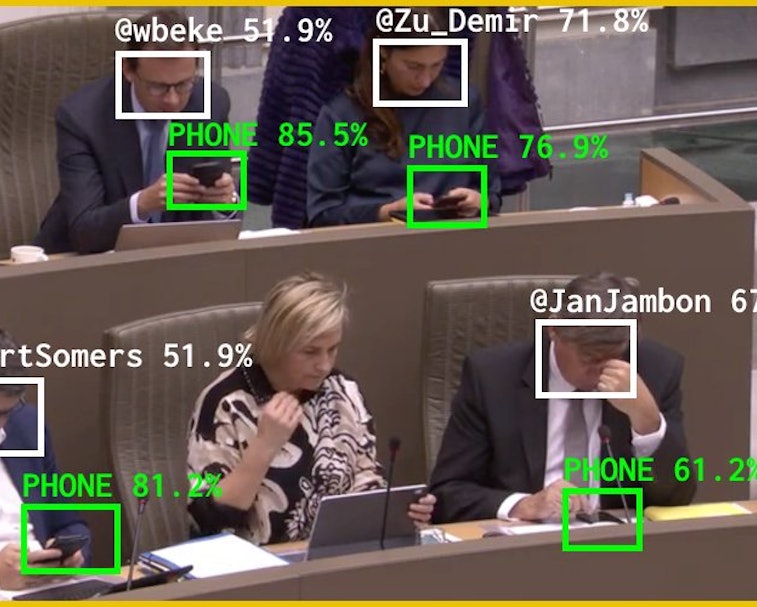 A nifty piece of artificial intelligence by Belgian artist Dries Depoorter has been tracking phone usage in filmed political debates, and it turns out politicians are on their phones during meetings just as much as the rest of us. Maybe even more, in fact.

Depoorter’s project, which he has named “The Flemish Scrollers,” targets Belgian politicians in particular. Every meeting of the Flemish government is live-streamed via YouTube — so Depoorter realized he could use these streams to automatically tag distracted politicians (h/t TheNextWeb).

To make matters more interesting still, Depoorter has created a Twitter account for the project that automatically tags those politicians flagged for being distracted. Scrolling politicians are also called out on the project’s Instagram account. But Depoorter’s underlying message here is a more sinister one about AI surveillance.

What are they doing? — On a surface level, Depoorter’s project is a novel use of AI, using readily available facial recognition technology to determine whether or not politicians are actually paying attention to ongoing proceedings. The Flemish Scrollers is rooted in some real-world drama from a few years back; Flemish Minister-President Jan Jambon was caught playing Angry Birds on his phone during a parliament session in 2019.

Depoorter’s project is doubly interesting when you consider its limitations. The YouTube view of these sessions is enough to discern whether or not a politician is using their phone during official business hours, but it’s near-impossible to say, from this distance, what exactly that politician is doing on their phone. There’s a good chance at least some of these politicians are using their phones for work-related reasons, right? That’s just one of the many limits of surveillance AI — and Depoorter’s project puts that limitation on blast.

The internet is watching — As TheNextWeb points out, Depoorter’s work largely focuses on privacy. He’s spent many years considering the implications of omnipresent cameras in our lives — most recently by deploying more than 1,500 unsecured CCTV cameras and allowing anyone to access their video feeds at any time.

In this context, it’s clear Depoorter isn’t simply looking to narc on distracted politicians (though that is a fun side effect). The project is more an exploration of how surveillance can be overwhelming and misleading. There’s no proof these politicians aren’t conducting real-time research or communications on their phones during these sessions; the data is inconclusive.

With facial recognition technology very much on the rise, Depoorter’s layered message here really hits home. And maybe some politicians will realize they’re on their phones too much at work, too.