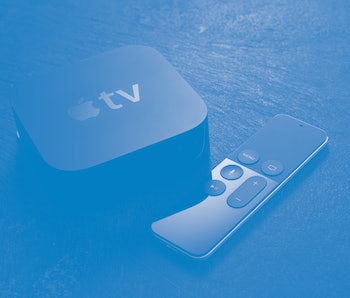 Your next Apple TV might be much more than just a streaming box. Apple is reportedly working on an iteration of its Apple TV that includes a HomePod speaker and a FaceTime camera, along with other smart home functions, according to Bloomberg’s sources.

The upgraded Apple TV would be much more robust than the device has ever been before — more of a full-fledged smart multimedia center than just a convenient way to watch Netflix and Apple TV+. The product is still in very early development.

The inclusion of a speaker and a TV-mounted camera could revitalize the Apple TV, a product Apple has allowed to fall behind the progress of its other flagship devices in recent years. The Apple TV hasn’t been upgraded at all in more than three years — in the modern tech world that’s basically the same as obsolesce.

The smart home market has continued to grow in the intervening years, and Apple has, for the most part, chosen to focus on its phones, tablets, and computers instead. Now it seems FOMO has gotten the best of Apple.

Time to face the competition — The smart home sector of Apple’s business is all but nonexistent right now. Last year Apple introduced the HomePod Mini, with an enticing $99 starting price — but it also discontinued the original HomePod last month. And the company hasn’t released any other smart home devices recently.

But the smart home market is impossible to ignore in 2021. Amazon’s lineup of Echo smart speakers is absolutely enormous. Google’s Nest speakers are more powerful than ever. The expansion of Apple TV into a full media center, complete with the ability to FaceTime and communicate with Siri, could be just the kick start Apple needs to get consumers interested in its smart home products once again.

Plus a touchscreen speaker — Bloomberg’s report also details the development of a second smart home device: a high-end speaker with a touchscreen. So basically an iPad with a stand, at the most basic level, though with a HomePod-like speaker.

Those familiar with the plans — which are still in early stages and might never come to fruition — say Apple is considering the addition of a robotic arm on the product to follow a user around the room. The end result would be very similar to the latest Amazon Show model, in itself a copy of Facebook’s Portal.

Price point will be a big factor in the success of either of these hypothetical products. It will be difficult to sell the touchscreen speaker to someone with an iPad, for example, if it’s very expensive. Apple could find balance in releasing a newer Apple TV device without the smart speaker and FaceTime camera — something that’s been rumored for a while now, too.