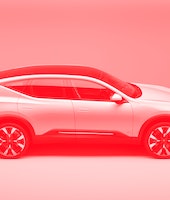 The official MSRP of the Polestar 3.

Polestar is filling out its electric vehicle roster with its first electric SUV, the Polestar 3. We got a first look at the Polestar 3 in December, but now we have some official prices to see where it falls amongst the competition. Starting at around $76,000, the electric SUV is somewhere in between Polestar’s luxury sedan, the Polestar 1, and its more affordable Polestar 2.

Polestar’s CEO Thomas Ingenlath revealed the Polestar 3’s pricing at the Automotive News Europe Congress, according to a report from InsideEVs. The electric SUV will start at €75,000, or roughly $76,000, with the decked-out trims going up to €110,000, or around $111,000.

When Polestar 1 came out in 2019, it was largely compared to Tesla’s offerings. Polestar, isn’t just competing against Tesla anymore, since the EV market has welcomed more established auto brands. When the Polestar 3 is revealed later this year, it’ll go up against electric SUVs like Mercedes Benz’ EQS, BMW’s iX and Rivian’s R1S, which roughly fall around the same high-end price range.

Competition is good — The Polestar 3’s pricing falls in the right spot to actually be competitive in an increasingly crowded market. Compared to Tesla, the Polestar 3’s price will fit somewhere in between the Model Y and its newer Model X. It feels ideal for those not looking to drop more than $120,000 on the Model X, and those who want other options besides the Model Y.

To really compare it to other electric SUVs, we need the Polestar 3’s specs. Unfortunately, Ingenlath didn’t reveal any new specs, but we do know that it will have a dual-motor drivetrain, a battery aiming for around a 372-mile range, and an autonomous driving mode using LiDAR.

October debut — Polestar is still planning to officially reveal its electric SUV in October, with preorders expected to go live shortly after. Polestar will then start production of the Polestar in early 2023.

Beyond the Polestar 3, the Swedish auto maker is trying to fill out its electric vehicle lineup further with a new SUV and sedan in the works. Polestar says that the Polestar 4, which is expected to be another SUV, should arrive in 2023, while the Polestar 5 sedan will arrive in 2024.