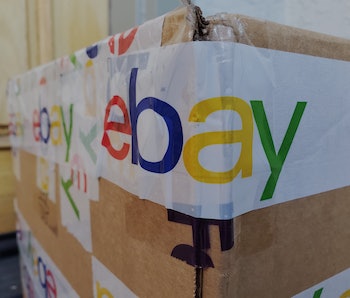 eBay announced today that it will begin allowing the sale of NFTs, the trendy digital collectibles that have converged on the art and blockchain worlds in recent months. Only approved sellers will be allowed to sell NFTs initially, but eBay plans to expand that pool later on.

Digital collectibles — This announcement marks the first time that eBay has allowed the sale of digital goods, save for some exceptions like domain names and virtual items for games.

eBay says the maximum price of an NFT, or non-fungible token, will be set at $10,000. That’s much less than some NFTs have sold for in recent months. The most expensive sale has been a piece of artwork from digital artist Beeple, real name Michael Winkelmann, that sold for $70 million in April, for instance. Twitter CEO Jack Dorsey sold his first tweet for nearly $3 million.

NFTs are essentially digital collectibles — files that have been cryptographically signed and recorded on a blockchain ledger that tracks ownership. The idea is to create value through scarcity — even though anyone can view Beeple’s piece titled “Everydays: The First 5000 Days,” there exists only one “official” copy signed by Winkelmann himself. An artist could theoretically release a batch of signed copies at a reduced price. NFTs also allow artists, should they choose, to earn a royalty each time their piece is sold and re-sold.

Fad or future? — It’s yet to be seen whether NFTs are a fad or a sustainable trend. How many people are willing to pay $70 million for art that lives on a screen? But optimists hope NFTs could provide a sustainable source of income for smaller artists, who could sell small collectibles to their biggest fans.

Some people have been willing to pay tens of thousands to get the only signed copies of iconic memes like the “Leave Britney Alone” video and the “Disaster Girl” photo.

Amid all the hype, it’s been speculated that a lot of the bigger sales have been completed by buyers speculating they can flip the NFTs for a quick profit. Beeple’s $70 million artwork appears to have sold to an entrepreneur who added it to a fund anyone can invest in.

Average prices and volumes of NFTs sold saw a big drop in April, and the market remains very volatile.