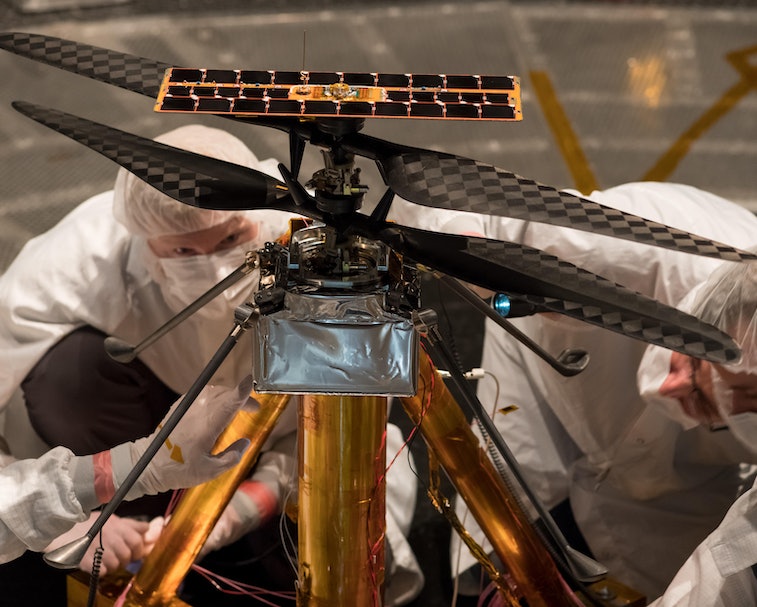 Early this morning, NASA successfully landed its Ingenuity helicopter on Mars, making history as the first powered, controlled flight on another planet. The Perseverance rover confirmed the helicopter’s completed landing at 6:46 a.m. ET.

NASA is thinking of the Ingenuity copter as another method by which to explore the depths of Mars and, eventually, other planets as well. “We don’t know exactly where Ingenuity will lead us, but today’s results indicate the sky — at least on Mars — may not be the limit,” said NASA Administrator Steve Jurczyk in a press release.

Ingenuity is more of a drone than a traditional helicopter, standing at a diminutive 19.3 inches tall and weighing just four pounds. Its first flight was conducted entirely autonomously, using algorithms created by NASA’s Jet Propulsion Laboratory (JPL) in Southern California. The drone flew at a prescribed altitude of 10 feet for 30 seconds before descending; the total flight took about 39.1 seconds.

Exploring the depths of distant planets has never seemed quite so plausible. We just landed a helicopter on Mars!

Just a demonstration, for now — Looking at the data alone, Ingenuity’s first flight might come across as somewhat underwhelming. All this hype for 30 seconds in the dusty Martian air?

But the fact that Ingenuity was able to take off and land at all is extremely impressive. Space exploration vehicles are typically restricted to ground travel because planets like Mars have many unseemly variables, like low gravity levels and (in Mars’ case) an extremely thin atmosphere. With only one percent of the air pressure compared to Earth, it’s incredible Ingenuity was even able to use its rotors to take to the air.

Today’s flight was purposefully short, as it was meant to simply demonstrate that we can take to Mars’ skies without issue. Now we can work on longer trips with higher stakes.

Mars is teeming with robot life — With the likes of Elon Musk’s SpaceX around, NASA sometimes feels like a relic of the late 1900s — but its continued innovation, especially in exploring Mars, proves the agency is still incredibly relevant. And there’s plenty more energy where that came from.

Right now the Perseverance rover and its little Ingenuity drone friend are living it up on Mars, having the time of their lives exploring the Red Planet. Musk has long dreamed of bringing society to Mars; NASA has already done so, albeit only as a small community of curious robots.

The Mars airfield where Ingenuity first took flight has been named “Wright Brothers Field,” a homage to the first flight taken on Earth. That’s a testament to the importance NASA sees in Ingenuity’s success — the Wright brothers’ experiments led us to Earth’s skies and now we fly all over the place. Now it’s time to bring that energy to Mars.