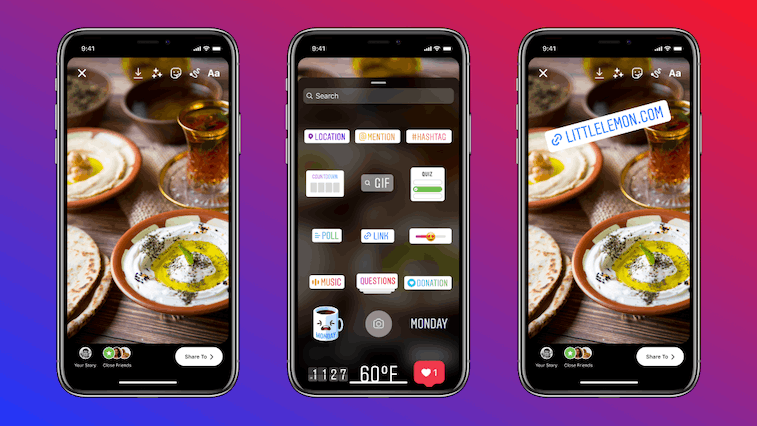 In the midst of a public reckoning over everything it’s ever done wrong, Instagram has taken a moment to breathe and do one thing right. Link-sharing on Stories is finally available to every Instagram user regardless of their follower count, the company announced today.

The ability to share links, which for most of Instagram’s history took the form of a swipe-up action, has until now been limited to accounts that are either verified or have more than 10,000 followers. These minimum criteria were likely set to stop spammers from making new accounts just to share malicious or scam links.

Instagram began experimenting with changes to the link-sharing feature earlier this year. The standard swipe-up tool has now been sunset, with a link “sticker” taking its place. Instagram began toying around with the idea of giving anyone at all access to the links this summer, though only a small number of users gained access at that time.

Took you long enough — Instagram’s feature set has expanded enormously in the last year or so, most notably in building up its shopping section and pushing Reels into the mainstream. And basically every time a new feature was released that didn’t involve linking, users crowded CEO Adam Mosseri’s mentions pleading for general access. Hence Mosseri’s assertion today that “we heard you, 🙏🏻”

Instagram has been hit with plenty of hate for gatekeeping the swipe-up feature over the years, but the privilege attached to it came into sharp focus last summer around the Black Lives Matter protests following the murder of George Floyd. Users wanted the ability to organize and share resources from home, given the pandemic, but only Instagram’s most powerful users were able to share links.

“We made this decision based on feedback we heard from the community about how impactful it would be for accounts of all sizes to benefit from link sharing to engage with their followers,” Instagram says.

Too bad everything else is bad — Good on Instagram for actually listening to what its users want, even if it did take years of begging for that to happen. It’d be a lot easier to feel genuinely excited about the link sticker if Instagram weren’t flopping in every other regard.

We thought Instagram’s overwhelming redesign plans would be the worst decision the company made this year. But then the company continued developing an Instagram Kids app despite many warnings from experts, and Mosseri compared Instagram’s less desirable side effects to car safety, and now there’s a huge investigation about whether or not Instagram is causing teenagers long-lasting psychological damage.

So, uh, thanks for the sticker, I guess. Give us a call when you figure out how to run your platform in a way that isn’t, you know, generally destructive in pursuit of cash.