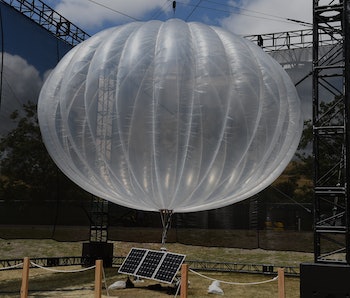 Alphabet subsidiary, Loon, which makes stratospheric balloons that provide internet to hard-to-access areas has had a major boost to its capabilities and its devices' longevity thanks to new technology from sibling company, Google.

New Scientist reports a new artificial intelligence controller from Google is helping Loon helium balloons stay up in the air for more than 300 days. Before this, the best streak the balloons had managed was 223 days. The balloons need to stay within 30 miles of a ground station to be function properly and do this by adding or removing helium to adjust their altitude and take advantage of high-altitude wind currents. Being better able to learn from historical data is making the process more efficient, which means more time between visits back to the ground for refueling.

How do Loon balloons work? — The enormous polyethylene balloons float at least 12 miles above the ground in the stratosphere. Made up of the most widely available plastics in the world, Loon balloons' task is technical. It provides 4GE LTE network connections in specific areas. For example, as the New York Times reported in July, Loon balloons were making commercial internet possible in Kenya in a 31,000 square mile area that included the country's capital.

Loon balloons have also been deployed on an emergency basis, including the areas hit by Hurricane Maria in Puerto Rico in 2017. The technology was designed to provide internet in areas that are underserved by other internet infrastructure, or hard to reach.

When it's needed — "Pro tempore" technology like this — meaning that it can be used for the time being — is reliable. But with weather conditions being unpredictable at times, the balloons that keep people connected to the digital world need a little extra help. With Google's artificial intelligence, Loon's technology is more capable of navigating the stratosphere while minimizing deviations from their designated courses while also conserving energy and, thus, increasing longevity.

The balloons' new capabilities are thanks to deep reinforcement learning. The AI controller can reference historical forecasts, wind charts, and real-time weather conditions to play out various scenarios and then calculate the best response. The controller is also able to keep energy usage to a bare minimum when the balloon is running low, increasing the odds of it making it back to the ground safely even in inclement or unusual weather.

As a result, the balloons can not only stay aloft longer but go off course less frequently, making the connectivity they provide more reliable and the cost to maintain them lower. The technology could also make them a more compelling solution and see them rolled out in more places.