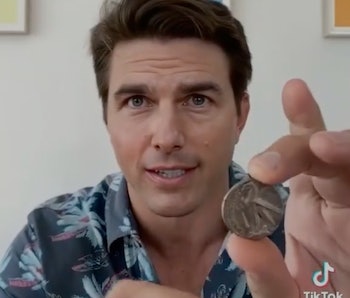 New deepfake videos of actor Tom Cruise have made their way onto TikTok under the handle @deeptomcruise, and boy do they look real. They're so realistic, in fact, it's possible that you wouldn't even know they're computer-generated had you not been alerted by the account's handle. And they were made using not much more than sample footage of Cruise and deepfake technology that's getting easier for anyone to use.

Not even two years ago it would have been easy to differentiate between a real and an AI-generated video of somebody. But the technology is advancing so rapidly that we've reached a point of escape velocity, and it's obvious that deepfakery isn't going to be used just for innocent purposes, like animating pictures of your past relatives.

This video of Tom Cruise? It's a computer-generated fake.

Seeing is believing — In a series of tweets, Rachel Tobac, the CEO of SocialProof Security, warns that deepfakes like @deeptomcruise threaten to further erode public trust in a world where media literacy is poor and people already can't agree on what's true or false. Like the black and gold dress, where one person might notice giveaways that the Tom Cruise videos are synthesized, another might not know the signs of a fake and swear up and down that they're real.

"Just because you feel you can personally tell the difference between synthetic & authentic media, it doesn’t mean we’re good to go," she says. "It matters what the general public believes."

Deepfakes are especially dangerous because video is widely considered indisputable evidence. A prominent individual could be deepfaked into performing a hate crime, or a person who legitimately committed an unjust act could use deepfakes to craft an alibi.

AI vs AI — As deepfakes have gotten better, companies including Microsoft have built tools that can detect them, generating confidence scores based on signals that a piece of content is manipulated, like the appearance of subtle fading or greyscale elements invisible to the naked eye. And in fact, a website called CounterSocial was able to detect the Tom Cruise videos as fake when they were run through its own artificial intelligence algorithm.

But TikTok is where the videos are hosted, and that app doesn't have any sort of deepfake detector built in. The problem with retroactive detection is that by the time false information has been flagged, it can be too late to reverse the damage. Microsoft is trying to address this with a digital signature tool. The idea is that content creators would sign the metadata of a video as it's being encoded, and a tool that users install in their browsers would then alert them if the metadata has been altered in some way. It's still an experimental concept.

Time for labels — Tobac says that apps like TikTok need to have integrated deepfake detection and labeling tools. And until then, Cruise and others will need to verify themselves on these social networks just to get out in front of fakes.

Even after such detection layers are added to apps like TikTok, deepfake technology will continue to improve, and that likely means a constant game of cat-and-mouse from here on out. Microsoft has admitted that even its detection technology will need to be constantly updated. That's simply the nature of technology.