“Simply put, these are by far the highest fidelity speakers we’ve ever created for the Mac, and this is the best combination of camera and audio ever in a desktop display.” 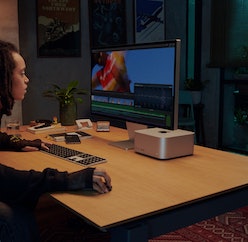 Apple just announced the Studio Display, a new 27-inch monitor that could easily be seen as a spiritual successor to the pricey Pro Display XDR, at its Peek Performance event. The main difference: this one is significantly less expensive. But, uh, it’s definitely not cheap.

The Studio Display — news of which first leaked last week — is a standalone monitor, so it can be used with just about any computer. Apple is banking on it being used by buyers of the just-announced Mac Studio.

Most intriguing is the addition of an A-series chip in the Studio Display — an Apple chipset most commonly used in iOS devices. And you can buy it right now.

The specs — The Studio Display shares some characteristics with its older sibling, the Pro Display XDR, especially in the advanced image processing housed within its frame. It includes Apple’s state-of-the-art anti-reflective coating and TrueTone capabilities, for example. Its optional features are similar, too, with the ability to add a height-adjustable stand or nano-textured glass. (Those will, of course, cost you extra.)

Unlike the XDR, the Studio Display contains an A13 Bionic chip, which allows the monitor to power a 12 MP wide-angle camera (the same one found in the latest iPads). It’ll also power one of the monitor’s most notable features: a six-speaker high-fidelity sound system. Yes, it supports Spatial Audio. And there’s a three-mic array paired with it, making it perfect for FaceTiming family or jumping on a Zoom conference call.

The Studio Display has a total resolution of 5K, with a pixel density of 218 ppi and a combined total of 14.7 million pixels. It copies the XDR’s port array, with one Thunderbolt port and three USB-C ports on the back. That means you can connect up to three Studio Displays to one Mac.

Priced to sell — Specs aside, consumers will likely first notice the monitor’s price point. It’s still a hefty cost for a computer monitor, when so many less-expensive options exist from other companies, but the $1,599 is still far, far less than the Pro Display XDR’s starting price of $4,999. Sure, you could buy the new iPhone SE three times over for the same price, but the display is really nice.

Along with the new Studio Display, Apple also announced a full lineup of black-and-silver accessories. The trackpad, Magic Mouse, and Magic Keyboard will all be available in the new color scheme to match the Studio Display.

The 5K Studio Display goes on sale today, with availability for shipping beginning on March 18.