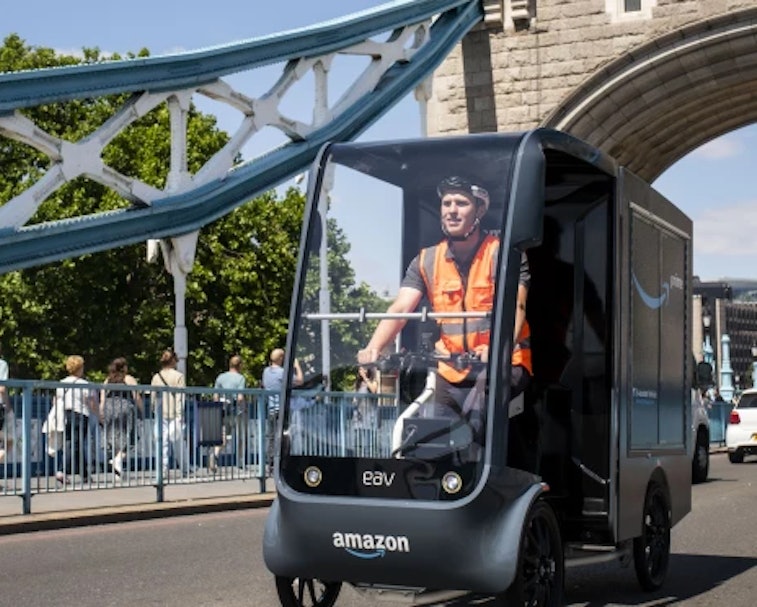 Amazon is testing electric cargo bikes as a replacement for some of its gas-guzzling vans, a step that could help the company hit its goal of being net-zero carbon by 2040. Like the UPS cargo bikes that have been peddling around NYC, Amazon’s e-bikes look a lot like miniature delivery vans. A cute touch, if you ask us.

The fleet of e-bikes is part of a larger Amazon initiative to create a “micromobility hub” for sustainable deliveries in Central London. The cargo bikes will be joined by a fleet of walkers who will — you guessed it — walk packages to their final destinations.

Low emissions for low-emissions zone — The initial fleet of cargo bikes will work in London’s Ultra Low Emission Zone, covering about 10 percent of its area. That’s a boon to Amazon’s pockets, too: gas-guzzlers are charged a fee for roaming those streets.

Amazon hasn’t said much about the cargo bikes themselves, though they bear a striking resemblance to the eQuads being tested by UPS. Those are about 10 feet long, with six of those feet dedicated to cargo space. Like other electric bikes, the eQuad allows riders to pedal with assistance from an electric motor.

The e-bike revolution — Delivering packages on the back of a bike isn’t novel, but these cargo bikes are built to carry much more than your average bike basket. That could be a game-changer for delivery companies, especially in crowded areas where driving a van is almost more trouble than it's worth.

All-electric automobiles are garnering intense amounts of attention this year, as traditional automakers finally begin making their slow transitions to greener engines. It’s easy to lose sight of the humble e-bike in this frenzy. We’re watching something of an e-bike revolution unfold, too, with hundreds of thousands of Americans adopting them as a form of travel.

Deploying e-bikes as part of a permanent delivery infrastructure will bring unique challenges — like driver safety — for Amazon. Pulling it off could be very promising for the future of online shopping.