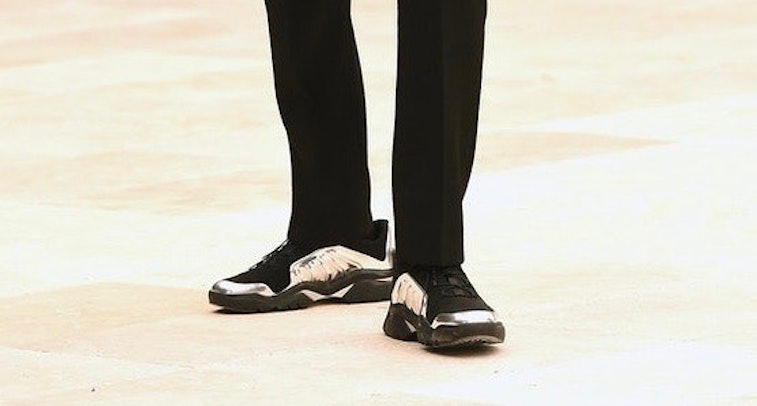 Like most of us, it seems Louis Vuitton is missing travel. On January 21, Virgil Abloh presented his LV Menswear FW 2021 collection for Paris Fashion Week, throwing in tons of references to planes, suitcases, and to-go coffee cups. In the spirit of going places, Abloh also debuted a new sneaker, which seems to take inspiration from a classic Nike Basketball silhouette.

The show was peppered with unique moments: Mos Def performed a number of original tracks, rising poet Kai-Isaiah Jamal made history as the first Black, trans model to walk a Louis Vuitton show, and Abloh showed off his architectural style with an odd skyscraper-sculpture jacket. Alongside these innovative designs were also ones that looked more familiar, like Abloh’s new sneaker design, which looks very similar to Nike’s Air Foamposite sneaker.

While we wish we could claim innocence, Abloh has a long history of “borrowing” ideas from other brands, and has been accused of stealing from lesser-known designers on multiple occasions. His label Off-White has copied logos from the University of Nebraska, the Philadelphia Eagles, and Helly Hansen, the latter of which sued Abloh's brand.

We doubt he’ll get bad publicity from Nike, though, especially with Swoosh x Off-White collaborations in the works. Instead, the brand will direct its bad energy towards Warren Lotas, who has faced multiple lawsuits from Nike over his fake Dunk sneakers. The Swoosh has inexhaustibly beaten Lotas despite his attempt to offer a replacement shoe with further alterations. Abloh, on the other hand, has free rein — he’s making Nike too much of a profit for it to care.

Fakes on your feet — Abloh became Louis Vuitton's artistic director of menswear in March 2018, and has since created several coveted sneakers for the brand. Last year, he dropped the LV Trainer as well as the LV Comet shoe, with both pairs taking heavy design inspiration from popular Air Jordan 3 and Jordan 4 models. Both silhouettes escaped without comment from Nike.

For now, a name and release date are unavailable for Abloh’s new Louis Vuitton sneaker. One thing’s for sure, though — it’ll cost a lot more than a Nike sneaker.