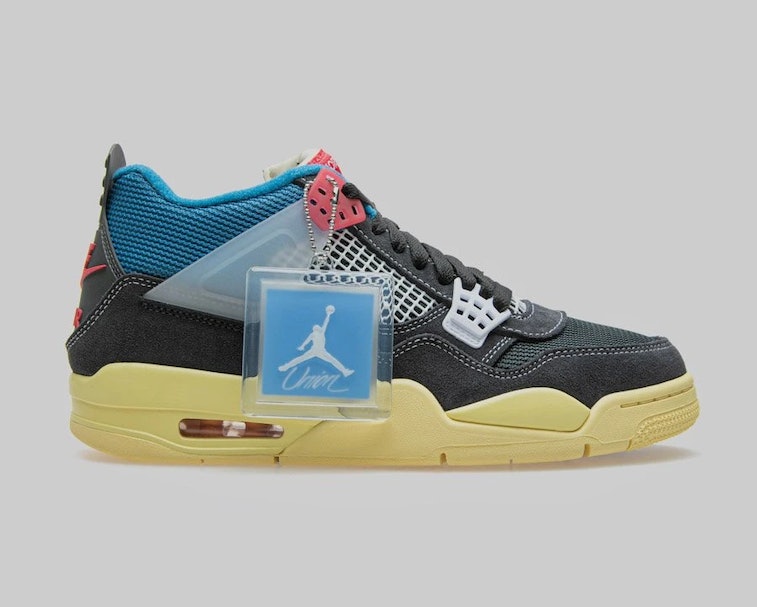 Jordan Brand and Union Los Angeles have finally revealed their highly anticipated Air Jordan 4 collaboration, after months full of endless leaks and rumors about what the sneaker might look like. A followup to their partnership from 2018, which included two Air Jordan 1s, this new capsule consists of four different pairs total. Two of them are retro Air Jordan 4s, the "Off Noir" (pictured above) and "Guava," which are complemented by an AJ Zoom '92 a mid-top version of one of Jordan's latest shoes, the Delta. The AJ4 Off Noir and AJ Delta Mid both feature a mostly black design with blue and pinkish accents, while the Guava AJ4 and AJ Zoom '92 take on a similar pattern but with white instead of black on the upper.

Inspiration and DIY — Of course, the most hyped sneakers from the collection will be both of the Air Jordan 4 models, which Union LA owner Chris Gibbs says were inspired by the brands' Jordan 1 collab that featured black, white, red, and blue hues. The difference, he said, is that the brands wanted to offer something familiar-yet-new and they decided to use those same colors but muted in the AJ4s. Gibbs added that "the vision here was to mix suede and mesh fabrics," an idea that led to the addition of thick but plush suede that draws cues from Birkenstock sandals, along with an '80s-style mesh fabric.

"Back in the day, I had always liked to wear my IVs with a short tongue, so I would fold them over themselves and tie them down," said Gibbs. "So we decided to fold the tongue over and stitch it down with the same stitch pattern that we used on the 1s. The good news here is that the stitch can be easily removed to reveal a normal tongue size if that's your preference." This do-it-yourself element is key because, when the sneakers first leaked, sneakerheads were complaining about the short tongue on the shoes.

Gibbs said the other major detail was the editing of the paneling of the Union Air Jordan 4s, which gives them a slightly different shape compared to the original from 1989. "We did this for 2 reasons," he said. "First off, it created a dope toe vamp view when you look down... my favorite view is when you look right down at kicks; the 'birds-eye view.' Secondly, It allows for a more balanced ratio of mesh to suede, which is something I was trying to achieve as well."

More to come — While there's no information on release date or pricing for any of the sneakers, a countdown timer on Union LA's site suggests the collection could drop around August 29. Regardless of when they'll arrive, these Air Jordan 4s will be one of the hottest collaborations of 2020 when it's all said and done.

Just to give you an idea of what to expect if you can't buy these at whatever retail price may be, the Union AJ1s are reselling for as much as $5,000 on the secondary market, depending on size and color. Indeed, Union's Air Jordan 4s are expected to be quite limited, so you should start figuring out a plan for how you intend to make them yours if you can... or if you get lucky.