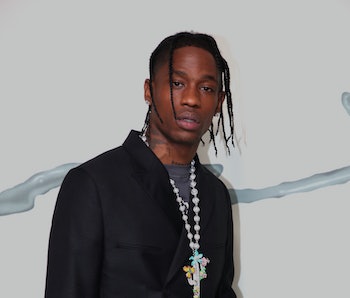 With more sneaker collabs than songs out this year, Travis Scott may be changing career paths. Just days before the release of his Nike x Fragment Design Air Jordan 1 Low, Scott has teased another Nike sneaker collaboration, stepping out in an unreleased Nike Air Trainer 1 Mid model marked with his signature reverse Swoosh.

Casual advertising — Much like fellow rapper Kanye West, Scott likes to tease his upcoming collaborations through a classic celebrity custom: paparazzi shots. He previewed his upcoming Cactus Jack Air Max 1 sneakers by casually wearing them around New York City, while his previous Fragment Design Air Jordan Low was spotted by paps seven months before its official announcement. If paparazzi will follow the rapper everywhere, it makes sense he would use the images as free advertising.

Staying true to every aspect of his brand, Scott was seen wearing his unreleased Air Trainer 1 Mids in NYC as he stepped into a luxury vintage store. Pap shots show Travis casually styling his new kicks: The musician paired his brown sneakers with matching brown socks, black sweatshorts, a graphic long sleeve (probably vintage), and a brown baseball cap.

Throwback trends — Scott wore a similar outfit when debuting his multiple Cactus Jack Air Max 1 shoes, which are rumored to arrive this winter. Set to drop in brown, black, lavender, yellow, and light gray versions, the rugged sneakers are inspired by the desert and trending workwear designs, taking on a boot-like look reminiscent of Nike’s own utilitarian ACG line.

As ‘90s trends re-emerge, however, Scott has switched influence on his upcoming Air Trainer 1 Mid. Known as the “Swiss Army Knife of performance shoes,” the training sneaker reigned ‘90s sports and later, the ‘00s as Nike issued a rebirth series. With not many released today, the retro silhouette serves as the perfect exclusive to receive a Scott makeover — and the hype that accompanies it. Just as the rapper made Nike’s Dunk sneaker nearly impossible to attain, his influence could quickly make the Air Trainer 1 Mid the brand’s next top model.

Drop TBD — There’s no official word on whether Nike plans to release Travis’ Air Trainer 1 Mid — it could always be a one-off sample made for the brand’s favorite (or at least most active) collaborator. Sill, Scott rarely leaves his fans wanting more, and he’s not one to lose out on profit. We’re likely to spot these sneakers on-foot again, maybe even in a different color.