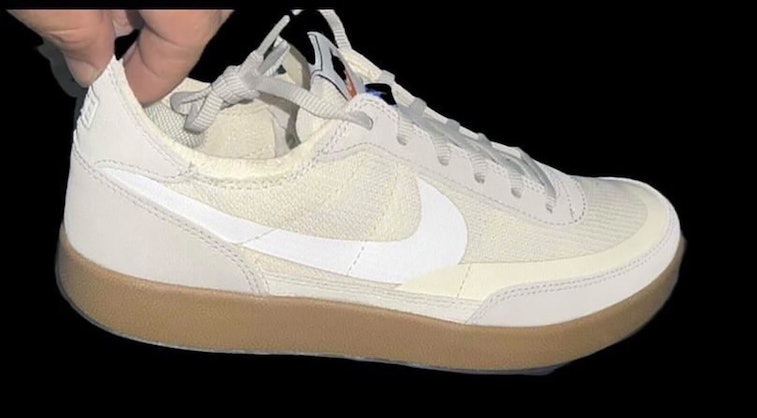 Tom Sachs is still connecting the dots between engineering and sneakers. The New York-based artist and Nike are ready to present the fourth chapter of their NIKECraft collab, dubbed “General Purpose Shoe.” The sneaker takes a step back from the excessively designed Mars Yard 2.0 sneaker, which was released in 2017 and rereleased as the Mars Yard 2.5 in 2020.

A walk on the normal side — An in-hand look revealed on Instagram by leaker @die_sel666 shows that the shoe features a neutral finish with an almost reflective Swoosh. As opposed to the more outlandish previous releases by Sachs and Nike — like the exploding poncho in 2019 and March Yard overshoe in 2018 — the “General Purpose Shoe” is exactly what its name suggests.

The sneaker resembles a mix between the Nike Air Force 1 and Killshot 2 by way of the thick sole and paneling. A cream shade takes over most of the shoe for a versatile wardrobe addition and the gum sole offers some darker contrast. Suede and mesh appear on the overlays, while the Swoosh is stitched flush with the upper.

Nike’s retro logo appears on the outer royal blue tongue tab, but its underside features a guarantee that the shoes are “manufactured to the exact specifications of athletes around the world.” Other details on the tongue include the serial number and Tom Sachs’s signature.

Pushing the boundaries — Ten years ago, Nike and Sachs’s partnership began with a collection that used materials that had been untested by footwear and apparel. The resulting NIKECraft collection used automotive airbags, boat mainsails, and NASA’s own spacesuits and was inspired by Sachs’s love of DIY.

While the capsule was meant for hardcore athletes, not the everyday consumer, it sold out quickly all the same — with the Mars Yard reselling for up to $20,000. Bridging Nike’s performance wear with NASA’s space equipment, Sachs created pieces that could withstand the physical demand of athletics and aerospace advancements.

Official release info is still under wraps for the upcoming Nike and Tom Sachs “General Purpose Shoe.” Given the sneak peek, however, it’ll probably see a release sometime this year. The sneaker is a bit bland compared to the past decade of Mars Rover airbag shoes and deployable fanny packs, but hey, the year just started.