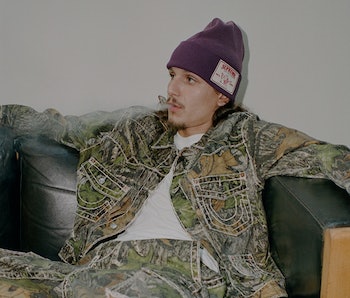 Last week, Supreme skater Tyshawn Jones was spotted in a collaborative True Religion hoodie surprising as much in its timing as its very existence. Now, after we’ve had just a week to process such a partnership, Supreme has confirmed its collaborative capsule with the once-reigning outfitter of premium denim.

True Religion’s link-up with Supreme is even more garish than we could have expected, beginning with denim cargo pants sure to offend most sensibilities. The surplus-pocketed jeans will arrive in camo, washed indigo, black, and pink — with all but the latter featuring True Religion’s signature contrast stitching. The brand’s horseshoe logo is stitched onto the pockets as expected, while the logo patch has been transformed to include Supreme’s name.

As soon we found out Supreme and True Religion would be collaborating, the first question raised was why now? It’s been 15 years since the gaudy denim was broadly in style, and hip-hop’s embrace of True Religion peaked approximately seven or eight years ago. Had Supreme launched this capsule then, it might have been Earth-shattering — but now we wonder just how much of an audience there’s left for it.

The rest of the goods — A run of denim jackets to match the cargos is also on the way, and they may just be the best chance at a sleeper hit. Reading the situation optimistically, Supreme’s embrace of True Religion does come as Y2K fashion has once again reared its head. Brands like Von Dutch, Ed Hardy, and Juicy Couture have been favored amid the aughts revival, and True Religion was every bit as defining of the era as the others.

The purple Buddha zip-up hoodie we saw last week will also launch in black, orange, and grey — with all but the black being faded. Rounding out the assortment is a run of inoffensive hoodies in the same colors, while a run of six-panel denim hats are the most obvious bridge between Supreme and True Religion. Available in indigo, black, red, pink, or an off-white, the caps see a rhinestone horseshoe sitting atop Supreme’s name. With no shortage of superfluous stitching and fraying, the caps may be even more ostentatious than the cargos and thus more likely to be embraced by Zoomers who weren’t around for True Religion's original reign.

Supreme’s True Religion capsule will release as part of its weekly drop at 11 a.m. ET Thursday through its website and physical locations. We can expect prices to be high for what was once considered luxury denim, but we’re less confident that the collection will spearhead a True Religion renaissance.