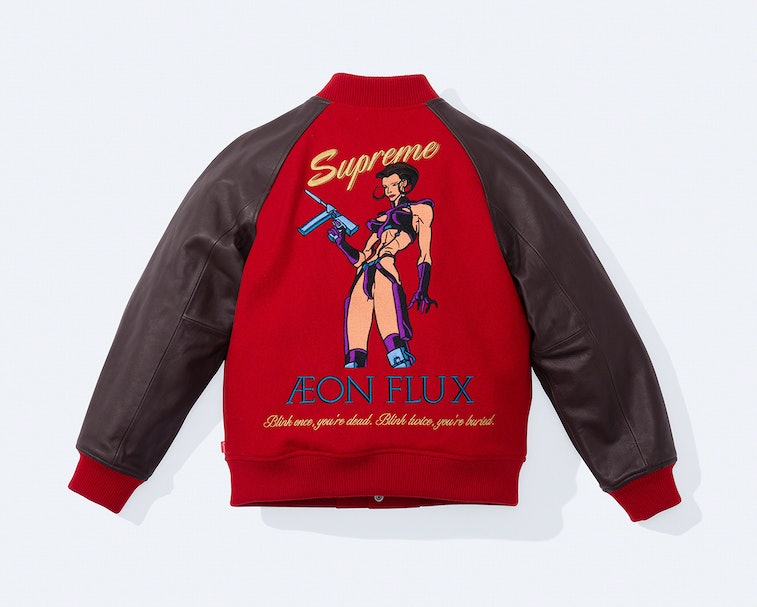 Beyond the Skittles collabs and 40-foot Airstream trailers, there’s a side to Supreme that also loves underground dystopian animation. Together with Korean-American animator Peter Chung, the New York City streetwear brand is releasing a series of apparel that celebrates Aeon Flux, the adult television series that broke ground on experimental, animated sci-fi adventures.

While the show’s Aeon Flux character embodies over-sexualization of female characters — as many were in the ‘90s — Supreme has incorporated her original likeness and other details onto its pieces. The collection is set on a mix of layering pieces and outerwear options and given a color palette that blends neutral shades with bolder hues.

Two varsity jackets in red and black depict Aeon’s character and her weaponry, along with the show’s titular logo. Other pieces, like crewnecks, soccer jerseys, long-sleeves, and t-shirts follow a similar design with graphics of her character, a drawing of her eye, and more of her weapons. For a full fit, any of the tops can be paired with shorts that also bear Flux’s eye.

Can’t spell Flux without an X — The series’ first six short films premiered in 1991 as part of MTV’s Liquid Television adult animation series, followed by five short episodes in 1992. A cult following generated so much positive feedback that MTV aired a standalone ten-episode season in 1995. Whether it was the experimental visuals, unrestrained storytelling, or the fact that viewers love a steamy dystopian romance, Aeon Flux is still beloved 25 years later. (A live-action film starring Charlize Theron was released in 2006, but Chung himself called it a “travesty,” and it has a 9-percent rating on Rotten Tomatoes.)

While media of the ‘90s often saw sexuality and violence as selling points, it was the depictions of themes like death and fetish in an animation style that helped Aeon Flux break barriers in television — and end up on Supreme apparel. “I’m interested in getting the viewer to shift his mind into thinking a new way. That’s really what the show is about,” Chung said in a release.

Supreme’s Aeon Flux collection for Spring 2022 will launch at 11 a.m. ET Thursday, March 31, through the brand’s website and physical stores. And if you need to beef up on the show, catch it on MTV’s streaming platform or Paramount+.