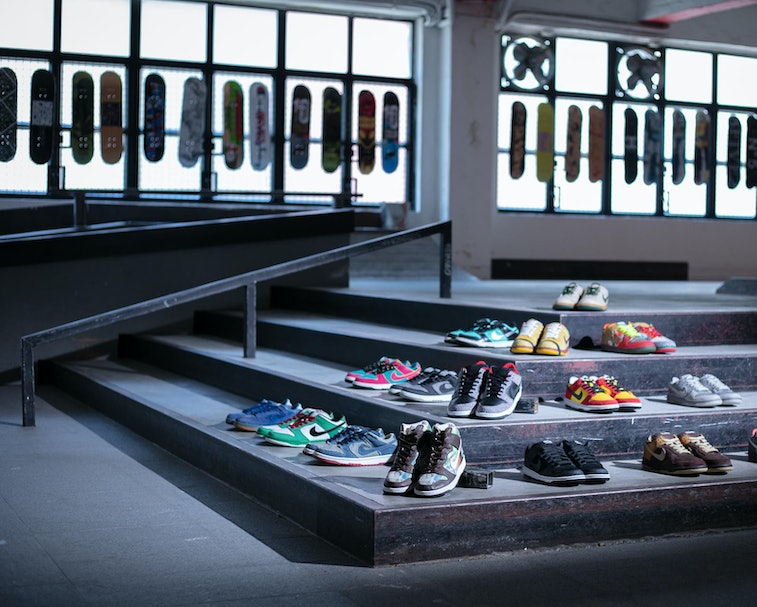 As Nike’s skateboarding division turns the corner on its 20th anniversary this year, Sotheby’s is putting its greatest shoes up for auction. The collection features 100 pairs of Nike SB’s most coveted sneakers, which is expected to amass over $850,000.

Every Nike SB sneaker in the auction is linked to a specific theme or moment in time. Some were never released to the public, others were taken from sample runs, and all add up to a skateboarding hypebeast’s ultimate dream sneaker rotation.

What’s on deck — Sotheby’s dug deep into the depths of Nike SB’s history to showcase the sub-label’s affinity for using the Dunk silhouette as a canvas for storytelling and playful visuals. The most valuable in the collection is a Dunk Low Pro “Paris” sample, which is expected to sell for up to $95,677. Each of the 200 sample pairs from 2003 is unique because the canvas on each shoe was cut differently.

Other highly valuable pairs include a signed Jeff Staple “Pigeon” SB Dunk from 2005, with a starting bid of $25,500. Brooklyn graffiti artist Futura’s 2004 Nike SB Dunk High Pro 'FLOM' comes with a signed skateboard deck and has an estimated value of between $63,760 and $89,260. There are only 24 in existence and each was originally made by Futura.

A couple of Supreme Dunks can be found as well, along with other collabs from Tiffany & Co., Hong Kong artist, Michael Lau, Stüssy, and Levi’s. The “Yellow Lobster,” “Freddy Kreuger,” and Reese Forbes' “Denim” will run you at least 10 grand to start, but more affordable pairs like the “Marty McFly” and “Puff n Stuff” have a starting bid of $510.

Pounding the gavel — Sotheby’s, though best known for its art auctions, has proved just how valuable the sneaker and streetwear industries can be. The auction house recently sold Virgil Abloh’s Louis Vuitton sneakers for almost $24,000 and the late designer’s Nike “The Ten” collection realized a hefty $35,280. Its Head of Streetwear and Modern Collectibles Brahm Wachter told Input earlier this year that its younger buyers are interested in securing certain cultural moments like the Nike SB Dunks through auction, and nostalgia is a driving factor.

The Nike SB 20 Years auction by Sotheby’s will run until April 25. Take a digital walk through the lots and relive some of the skateboarding division’s greatest moments.