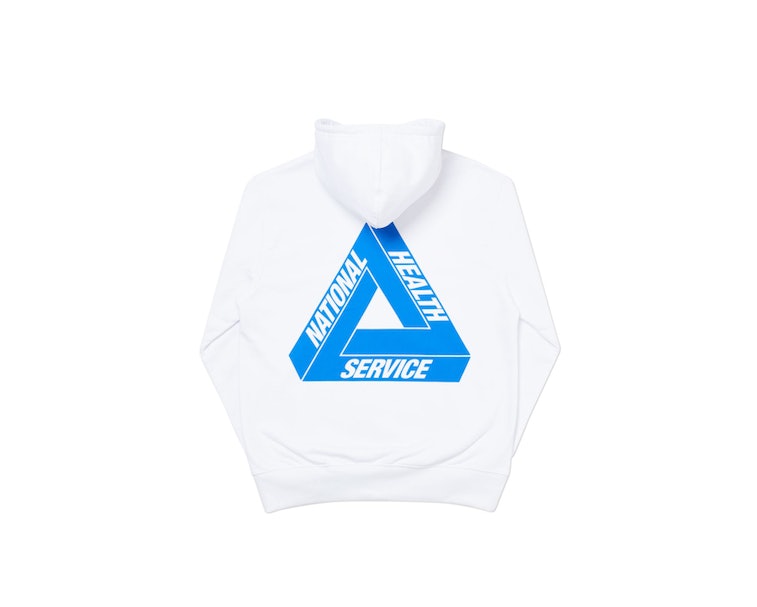 Streetwear is continuing to apply its drop model in the fight against COVID-19, as Palace has announced a limited capsule that will raise funds for the National Health Service. The British skate brand has tweaked its signature Triferg logo in honor of the U.K.'s publicly-funded healthcare system. It'll appear in blue on white T-shirts, hoodies, and crewneck sweatshirts that'll release this Friday. Each has a small logo on the chest, with the graphic blown up on the rear.

What'll be done with the £££? — All proceeds will go to NHS Charities Together, an organization with more than 230 charity members that support the nation's healthcare. In response to the coronavirus, the group is focusing its efforts on providing counseling, food, and other resources to promote the wellbeing of NHS workers while they're on the frontlines of the pandemic. Additional funding will ensure that patients continue to get care after they've been hospitalized.

Streetwear logos gone charitable — Palace's announcement follows Supreme, which released a Takashi Murakami-designed box logo T-shirt last week as a fundraiser for Help USA. Noah also announced on Sunday that it'll sell a variant of its core logo featuring a red cross on a T-shirt with proceeds going to Direct Relief. On the rear, it says "Thank You" with a heart replacing the "o." It'll go on sale Thursday, the day before Palace's offerings.

By working with their most popular motifs, respectively, the three brands ensure demand for their charitable efforts will be high. Each of these initiatives involve limited product, but a spokesperson from Noah said the brand isn't taking pre-orders, which it's done in the past to maximize proceeds, because its warehouse is running at reduced capacity due to the ongoing pandemic.

How to cop Palace — Palace's "Tri to Help" capsule will launch Friday as part of its weekly drop at 11 a.m. British Standard Time. Orders can be placed in any country besides the United States and Japan, a move likely intended to ensure Palace's locale has a better chance of purchasing. (Supreme also limited its box logo to the U.S. and Canada, despite having stores in Europe and Japan.)

Just like Supreme, the key is to be on the site when the clock switches and type with fury.