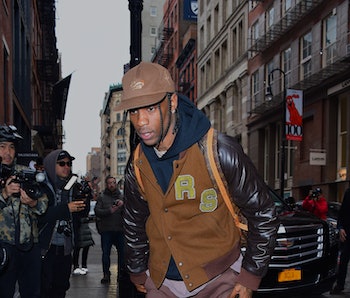 Travis Scott is continuing his reign as king of collaborations with yet another Nike sneaker. Complete with the rapper’s signature reverse Swooshes, more Air Jordan 1 Low shoes are set to drop next year — the color schemes and drop dates have yet to be announced.

Still, just the mention of another Scott and Nike partnership is enough to send hypebeasts into a frenzy. His last Air Jordan 1 Low, which combined Nike’s classic silhouette with Fragment’s sleek design, is one of the hottest shoes of the year: The model is reselling for over $1,000 and some pairs have reportedly been stolen while out for delivery. Consumers can’t seem to get enough of Scott’s exclusive sneakers — and accordingly, the rapper and Nike are pumping out shoes at a relentless pace.

What’s to come — La Flame has already racked up 10 Nike collaborations in 2021 alone. He’s released his last Air Jordan Low, as well as a matching High version with Fragment, a “British Khaki” Jordan 6, and has teased five upcoming Air Max 1s as well as a retro Air Trainer 1 Mid. Another Air Jordan 1, covered in animal print, is also expected by the end of the year. With more Air Jordan 1 Low models rumored, it doesn’t look like Scott will slow down in 2022.

Along with the other models that are surely cooking for next year, we can expect Scott’s low-cut sneaker to consist of three colors accented by his reverse Swooshes. Wings embroidery, co-branded tongues and heels, and printed insoles will finish off his next Air Jordan 1 Lows.

Is Scott a sellout? — At the rate consumers are buying, reselling, and hyping up Scott’s partnerships, it’s possible his shoes will go mainstream soon. While the rapper is cashing in on the exclusivity behind his name, his continuous collaborations are beginning to wear consumers down: Just like Nike’s Dunk — which Scott helped fuel demand for — the co-branded sneakers have been nearly impossible to obtain, frustrating customers and losing appeal. Besides, what makes a collaboration special if there are already numerous others following it?

As Scott continues to clock in at Nike, he should make sure each of his sneakers comes with a meaning beyond resale prices and exclusivity. What makes a shoe great is its story and design — not someone’s name.