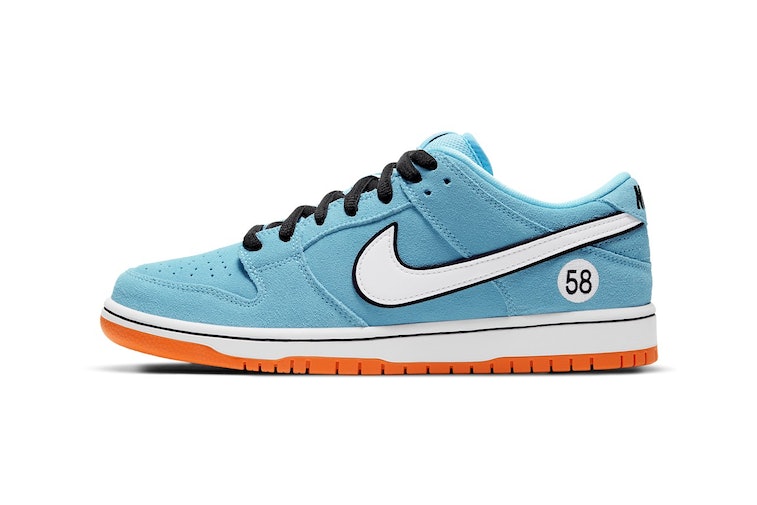 Nike SB is releasing a Dunk that all car racing fans should love. The Dunk Low "Gulf" takes on the iconic paint scheme called Gulf Oil livery, or in short, Gulf Livery. Sneaker blogs have pointed to the 1970 Porsche 917K as the source of inspiration, but the paint job is bigger than any one car.

Gulf Oil, a major oil company that's now defunct, first applied its trademark light blue and orange paint job to a pair of German airplanes in 1936. The color scheme was used in promotional materials in the decades following before appearing on a Ford GT40 that the company's vice president entered into Daytona International Speedway and Sebring International Raceway events in 1967.

Gulf Oil then took over the Ford GT40 racing team and gave the car an official makeover with "Gulf Powder Blue" and "Marigold." The car would go on to win Le Mans in 1968 and 1969, but the decoration became most famous on the Porsche 917 featured in the 1971 film Le Mans starring Steve McQueen. In the years since, the colors have appeared on cars from Audi, McLaren, Porsche, and Aston Martin — and Ford has brought it back for the limited Heritage Edition of its GT.

Something about these colors hits different — A strong association with winning certainly helps, but there's just something about the iconic light blue and orange paint scheme that can't be topped. Say your dad loves cars the way you love kicks — if you show him the "Gulf" Dunks, he'll have to admit that they're awesome even if he thinks your habit is absurd.

To pay homage to the Gulf Livery, Nike SB adorns the Dunk Low in a powder blue upper with orange outsole. Black outlines on the Swoosh are another nod to racing's most beloved paint job, and circular "58" badge on the tongue and heel are pulled directly from race car's number decals.

It doesn't take a gearhead to appreciate just how beautiful these Dunks are, but don't be surprised if you wear these and start getting compliments from dorky-looking middle-aged dudes. The "if you know, you know" appeal is going to be huge.

Tracking 'em down won't be easy — The Dunk Low "Gulf" will reportedly be exclusive to Nike SB's "Orange Label" skate shop accounts, similar to the yellow and green Grateful Dead Dunks from last year and many variants in the 2000s.

Japan is getting the kicks this Saturday, February 27, and the U.S. will reportedly follow sometime in mid-March. A mere $100 price tag will make the "Gulf" Dunk even more of a treasure should you get your hands on a pair — and the "presale" cost on resellers like StockX is already at more than $400.

My only hope, besides getting a pair myself, is that these end up on the feet of someone with the car to match.