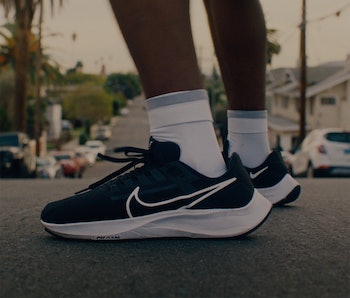 Ahead of this Sunday’s NFL Super Bowl, Nike and Madden are teaming up to encourage gamers to run by offering an exclusive player in Ultimate Team.

Between today and February 14, those who log five miles in the Nike Run Club app will be rewarded with the ability to wreak havoc in Madden 22 with an upgraded version of Aaron Donald. The player item for the Los Angeles Rams’ defensive force comes with a +7 speed upgrade, and users will also receive an achievement badge within the Nike Run Club app upon completion.

"I enjoy seeing kids get out and live active and healthy lifestyles," Donald said in a press release. "As a professional athlete, I think it's important to reinforce healthy habits to our youth. I instill these habits in my kids as they were instilled in me. I teamed up with Nike and EA Sports to unlock the future of sport and inspire the next generation of athletes to explore and play in a meaningful way."

Going after those rewards from Adidas and FIFA required purchasing the Adidas GMR device for $35, but Nike and Madden’s initiative comes with no cost to participate. To secure your boosted Aaron Donald for Madden 22’s Ultimate Team mode, you’ll just need to sync the Nike Run Club app with your Madden account and get running. Once you’ve logged five miles, it’ll be the turn of opposing quarterbacks to run from the NFL’s most imposing defender.