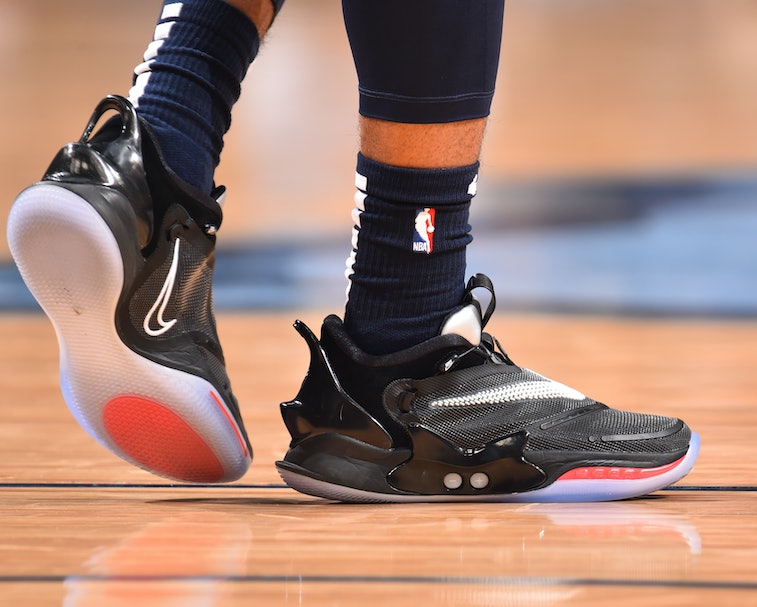 A year after making self-lacing basketball sneakers a reality, Nike has unveiled the second iteration. The new Adapt BB 2.0 features functional and aesthetic updates, with the former being influenced by player feedback.

In response to requests for more bounce, the kicks have been updated with Air Zoom Turbo cushioning similar to that found in Kyrie Irving’s signature sneaker line. The second version will also be easier to put on, replacing the sock-like Flyknit upper with a stretchable mesh. Designers reconfigured the midsole, which houses the self-lacing motor, to improve heel-to-toe motion.

A bolder design — While subsequent colorways help quell concerns, the initial Adapt BB was criticized for a simplistic design. Version 2.0 is much more striking from the jump. An enlarged Swoosh has shifted to wrap across the top of the shoe. It’s composed of a series of bumps that kind of look like Tic-Tacs, a resemblance I’m not complaining about. A variety of textures also make the upper more appealing, and the rear of the shoe stands out thanks to a prominent heel tab matched by a protruding heel counter.

When can you re-up? — Nike’s set to release the Adapt BB 2.0 on February 15, coinciding with NBA All Star weekend. The first version retailed for $350, but fingers crossed we’ll see a price drop in year two.