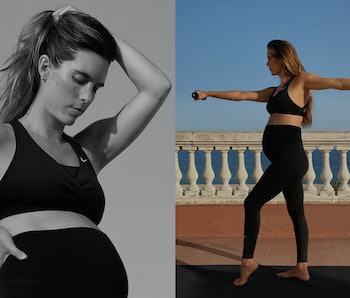 Nike is continuing to expand its offerings for women with the launch of its first-ever maternity line. With Nike (M), the brand enters a space that's still underserved among the sports apparel giants. Of the big four — Nike, Adidas, Reebok, and Under Armour — only Reebok currently has maternity apparel on the market. This comes as somewhat of a surprise, especially when Nike athletes Serena Williams, Alex Morgan, and Maria Sharapova have all had children.

The new maternity collection was designed by analyzing scans from more than 150,000 women, pregnant and not. As the process continued, the apparel was tested for feedback by nearly 30 Nike athletes who were either pregnant or postpartum. For its debut, the Nike (M) collection consists of a pullover, bra, tank top, and tights designed for bodies changing during and after pregnancy. The initial run will hit stores September 17 in Africa, Europe, and North America.

Nike (M) is sustainable, too — Nike says it spent three years creating the maternity collection, a year of which was dedicated to finding the right materials. The final product is a polyester that ranges from 78 to 88 percent recycled construction through the capsule.

"The Nike (M) sports bra is great because it’ll give me easy access for when I want to breastfeed," Perri Edwards, a British track and field athlete, said in a release. "The leggings give you options of wearing over your tummy or showing your tummy, and the maternity shirt has this extra material for the extra weight that I’m carrying. You look very smart, very comfortable, very hip."

Nike had a big pregnancy controversy last year — While Nike (M) has been in the works for much longer, it arrives a year after the company was exposed for its mistreatment of pregnant athletes. In a New York Times op-ed titled "Nike Told Me to Dream Crazy, Until I Wanted a Baby," Olympic runner Alysia Montaño said she had to fight with Nike to continue getting paid while pregnant. The battle remained behind the scenes and Montaño was praised for running at the 2014 United States Championships while eight months pregnant.

Kara Goucher, another Olympic runner, said she was forced to withhold her pregnancy announcement so Nike could time the news with Mother's Day. She also said her pay was withheld during the pregnancy and she felt pressured to compete just three months after the birth of her child.

Following the outcry from this revelation and a congressional inquiry, Nike announced a new maternity policy for its athletes that includes 18 months of pay and bonuses.