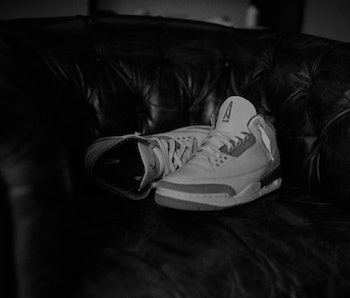 After much anticipation — and a slight delay — A Ma Maniére was scheduled to drop its Air Jordan 3 collaboration today. But following the verdict in the George Floyd trial, an emotional time for many, the boutique has decided to delay the launch of its sneaker to “create space for [its] community to reflect and focus its efforts on collective support.⁠⁠”

“This is a moment of mixed emotions for the Black community,” read an Instagram caption announcing the delay. “We need time to collectively recover from the emotional toll of the constant quest for accountability from the justice system, while we also face the reality of more innocent Black lives lost.⁠⁠”

Community first — The decision to delay the Air Jordan 3 collaboration comes after A Ma Maniére previously pushed back the drop date due to “unexpected delays,” and held two raffles — one just for women and another for the general public — for a few pairs of the sneakers. While the actual release of the shoe is delayed, all women’s early access draw and general raffle winners have been selected and notified, said the boutique.

A Ma Maniére has already been praised for its rollout, especially as the boutique centers its drop around Black women — a huge demographic of the sneaker community too often left out. The Air Jordan 3 was initially hyped up through a teaser video dubbed “Raised by Women,” where Black women could be seen running businesses, raising children, modeling, and more, all while donning their luxurious AJ3 sneakers.

By delaying the shoe’s release, A Ma Maniére keeps this same energy, prioritizing its community over everything. “This day and this moment cannot be overshadowed by sneakers. We must take the time to take stock of what this moment means for Black people and what we must demand from our criminal and justice system,” said A Ma Maniére owner James Whitner in the Instagram post announcing the delay. “As we say justice served, more lives are lost. A 15-year old Black girl lost her life yesterday as the verdict was announced. It’s a constant empty feeling for us, our reality is never easy. We need this time to come together and look after one another, nothing is bigger than our community right now.”

Still releasing this month — With the coveted shoe first scheduled to drop on March 30 — nearly a month ago — thousands of sneakerheads have been waiting to jump on the silhouette. Set to arrive in full family sizing, the release is open to everyone, with adult pairs priced at $200 and preschool pairs at $90. Even the smallest shoes will go fast, though, and those who want to cop need to plan accordingly.

Now, A Ma Maniére’s Air Jordan 3 will launch on April 28 at 12 p.m. ET, maintaining its release locations at A Ma Maniére’s website and an additional A Ma Maniére projects website. With raffles closed, this is consumers’ final chance to cop the sneaker — unless you’re willing to pay thousands for resale.

Additionally, the boutique plans to host a community event on April 21, the day the sneakers were supposed to drop, at 8 p.m. ET. A Ma Maniére says it will release more details on the event soon, with a goal of giving its community a space to “join and come together for a moment of collective support” following the verdict in the George Floyd trial.