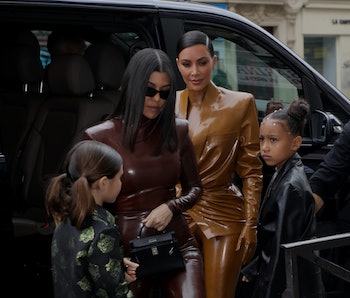 Before the Kardashians built their empire with the likes of Skims, Poosh, Good American, 818 Tequila, or Kylie’s lip kits, the family ran a string of fashion boutiques called “DASH.” Highlighted by early Keeping Up with the Kardashians episodes, the stores sold leopard-print kaftans and sky-high wedges under their signature black patent chandeliers — that is, until they closed in 2018 because the Kardashian fan base transitioned to wearing Yeezy.

America’s honorary first family is always expanding its business ventures, though, and the Kardashian-Jenners are now opening a physical location for Kardashian Kloset on the Las Vegas strip. If you’re unfamiliar with KK, consider it a reselling site, or a place for Kardashian-Jenner hand-me-downs. Opening in the center of Resort World Hotel, the store will stock pre-owned apparel and accessories from the family, with new pieces added weekly — because, of course, they would never be caught re-wearing one of their designer pieces.

A Kardashian thrift store — Kardashian Kloset first went live in 2019, and has become just as much of a social phenomenon as the famous sisters themselves. YouTubers rack up millions of views on their Kloset haul videos, often showing side-by-side comparisons of themselves and the Kardashian-Jenners in the same looks as “who wore it best” clickbait.

Contrary to popular belief, some of the outfits are actually decently affordable — offerings range from as little as $25 for sportswear, or as high as $55,000 for a rare Hermès Birkin bag from Kylie Jenner’s range. Consumers can even selectively shop through the store’s “collections” from each sister (or Kris) to get a certain look.

“Everyone is obsessed in some way, shape or form with the Kardashians,” Cynthia Bussey, the site’s co-owner (and Kris’ cousin) told WWD. “With what they do, with what they wear, where they go, and they follow them. I think that’s been the success of (Kardashian Kloset) because there is an obsession out there.” Clearly.

Bussey also stated that the family tries to make sure they don’t post anything on Kardashian Kloset that was gifted to them, but that sometimes pieces “slipped through the cracks” as a mistake.

Viva Las Kardashians — As for why the store is moving its IRL location to Nevada, instead of the Kardashian-Jenners’ home state of California, Bussey told WWD that “Las Vegas is an international destination,” allowing fans from all over the world to shop the pre-worn clothing. Other characters who frequent the location, including impersonators, mafia wives, and overly-drunk 21-year-olds, may also use their impulsive decision-making skills to help the store bring in sales.

More details on the new Kardashian Kloset shop will be revealed closer to its June 24 opening date, though Bussey has already teased that the physical location will extend the store’s offering beyond just fashion. We can only imagine what other goods the Kardashian-Jenners have to offer: Used lip kits? Stormi’s old baby blankets? Kim’s wedding ring?