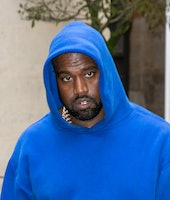 How much Yeezy is paying for its mistakes.

Ye, formerly known as Kanye West, may not be feeling like a million bucks despite his new name, new Crocs, and new haircut. That’s because his Yeezy brand owes nearly a million dollars — $950,000, to be exact — to settle a recent civil suit regarding shipping times, according to a press release from Los Angeles County District Attorney George Gascón.

“Online consumers are entitled to protection against unwarranted fees and unreasonably long waits for purchases to arrive on their doorsteps,” District Attorney Gascón said in his press release. “We will enforce state and federal laws governing online shopping in Los Angeles County.”

Running late — On October 22, the state of California sued Yeezy for “failing to ship items within thirty days and failing to provide adequate delay notices” to shoppers, among other allegations. The lawsuit claims that West’s company violated California state business code sections requiring products purchased online to be shipped within 30 days.

If the items are not able to be shipped within that time period, merchants are obligated to provide a refund, send out a notice of the delay, or find another remedy — none of which Yeezy has done, the lawsuit alleges. Legal documents also allege that the brand “made untrue or misleading statements regarding its ability to ship products within a certain timeframe, particularly where customers paid an additional charge for expedited shipping.”

They ain’t messing with no broke, broke — Now, Yeezy must pay $950,000 to settle the suit: “$200,000 in civil penalties to each of the four district attorney offices involved, $50,000 in restitution to the Consumer Protection Prosecution Trust Fund,” and “$25,000 in investigative costs to each of the four district attorneys’ offices,” according to the release. That’s enough money to pay for Yeezy shoes on the resale market, with funds leftover to pay for expedited shipping.

Under the settlement, Yeezy must also change how it runs future business. The brand “is prohibited from making untrue or misleading representations regarding a shipping timeframe or refund; adhere to laws relating to the issuance of delay notices; and is required to refund money to consumers who, in the future, purchase products that are not shipped in a timely fashion,” the release said.

Earlier this year, West’s business endeavors were estimated to be valued at $1.8 billion, so we think Yeezy will recover just fine. The lawsuit will certainly change the way the company moves forward, though — and we bet Ye misses the old, debt-free Kanye right now.