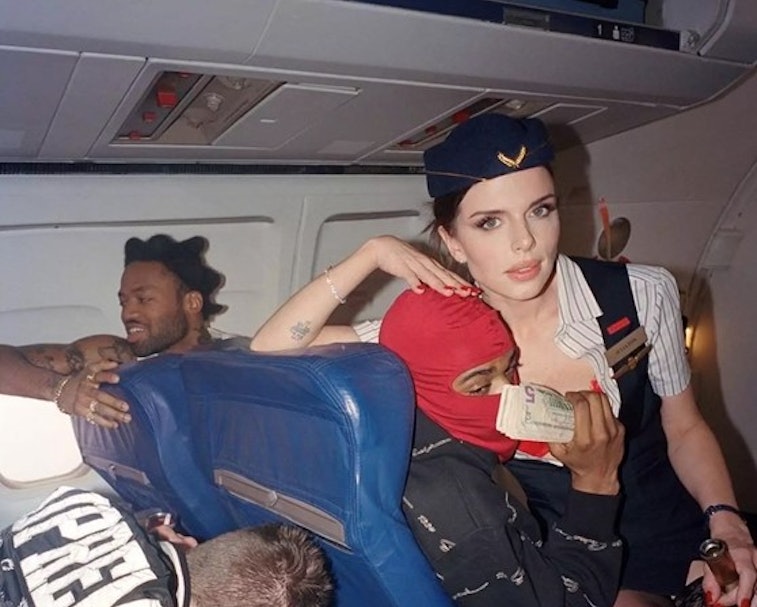 Once the muse of Josh Safdie and Kanye West, Julia Fox is on everyone’s radar these days. The actress, muse, model, and hustler has been now recruited by Supreme for her latest project, serving looks and Hennessy as a flight attendant.

The Fox has landed — For Supreme’s Spring/Summer 2022 campaign, shot by Harmony Korine, the campaign depicts Fox as a stewardess on a fictional Air Supreme airline. Hennessy in hand and blouse unbuttoned, Fox sits perched on the lap of skateboarder Tyshawn Jones, who sports a black jacket, red racing mask, and a handful of cash.

Elsewhere in the lookbook are skateboarders Caleb Barnett and Ben Kadow, established members of the Supreme family themselves. Although Barnett is hidden behind the aircraft’s seats, Kadow is featured head down in camo cargo pants and a black-and-white bomber jacket. At his feet is a Supreme duffle bag and a skateboard.

Korine has a longstanding relationship with Supreme that truly came alive in the 2000s. The photographer has been involved in many of its lookbooks and has implemented his grungy aesthetic for the New York City streetwear brand. “[Supreme has] kept strong because youth propels the culture, and they are always on the side of the youth,” Korine told Vogue in 2017. “You can’t fake that.”

Uncut jawnz — Although it was only a matter of time before Fox got swept off her feet by a streetwear brand as big as Supreme, not everyone is on board with Fox’s appearance. The comment sections of Supreme’s Instagram posts are riddled with misogynistic comments from hurt hypebeasts who think the brand could do better. The devil works hard, but Julia Fox works harder.

Following her breakup with Kanye West, a relationship that catapulted her status from indie actress to ultimate “It” girl, Fox has managed to keep her name in everyone’s mouth. From her fashion alone — including head-to-toe denim, leather pants galore, and DIY smokey eye makeup — the “#1 hustler” and Supreme are a match, considering their mutual (and sometimes overreaching) love for the limelight.

You’ll see the campaign plastered around New York City if you’re in the area. Otherwise, drop info for some of the products seen can be expected in the coming weeks. Some may think Supreme is trying too hard to engage in “the hype” of Julia Fox, but isn’t that exactly Supreme’s MO?