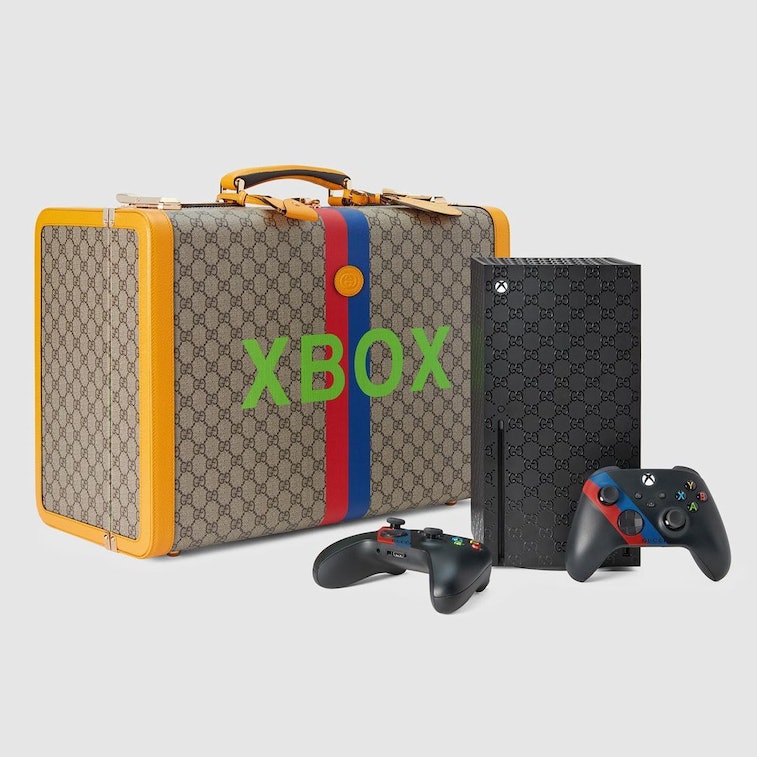 An exchange between Gucci and Xbox on Twitter first suggested a collaboration between the two. “Saying ‘GG’ at the end of every game will never go out of fashion,” Xbox tweeted, referencing the acronym for “good game” — which coincidentally mirrors Gucci’s double-G monogram. “We couldn't agree more,” Gucci replied.

Should buyers ever want to transport their Gucci x Xbox sets — as if they don’t have separate consoles for each house they own — the consoles and controllers come housed in a Gucci hard carry case. Dressed in the luxury brand’s signature monogram print, the trunk features red and blue stripes alongside yellow and green accents nodding to Xbox’s branding. “XBOX” and “GOOD GAME” are both printed on the luggage, which also includes a yellow tag bearing both Gucci and Xbox’s logos.

A challenging release — A decade ago, spending endless hours on the Xbox was seen as the antithesis of what made fashion cool. Now, gaming and high fashion go hand-in-virtual-hand: Besides Xbox, Gucci has already partnered with Roblox, Pokémon Go, 100Thieves, and Tennis Clash. Its Xbox collaboration may top them all, however, especially considering its exclusivity.

Like any Gucci product, the co-branded consoles and controllers won’t be easy to get. Only 100 gaming sets have been made, each of which is numbered with its respective edition much like Off-White’s ‘The 50’ Nike Dunks. Such limited stock, as well as a $10,000 price tag, will restrict everyone from getting the luxe Xbox setup — but the capsule is still guaranteed to sell out within minutes.

Gucci and Xbox’s collection drops November 17 at the designer brand’s website, as well as select Gucci stores. Copping the console, controllers, and carrying case may be gamers’ biggest challenge yet.