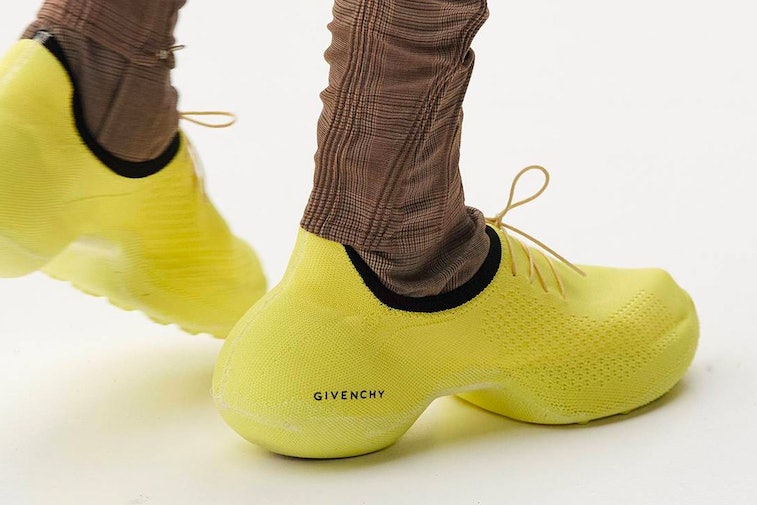 We may be on the cusp of summer, but knits are still in. Givenchy designer Matthew M. Williams has announced the release of the luxury house’s fully knit TK360 sneaker. The footwear oddity is set to drop in a few months' time and will add a fresh, highly technical take on the knit sneaker that’s become so popular.

Givenchy’s going soft — Williams first teased the TK360 on Instagram back in March, and the upcoming release will feature seven different color schemes. Aside from the black, purple, beige, and white models we saw in his post, the soft kicks will also release in highlighter yellow, navy blue, and baby pink. In true Givenchy fashion, less is more. The shoe’s design is kept to a minimum to focus more on the technicalities.

The entire sneaker is made of an elastic knit material and nixes laces for a true snug silhouette that molds to your feet. While the pairs made for the Fall/Winter 2022 Givenchy show earlier this year featured a skeletal and veiny graphic on the upper, the upcoming pairs opt for a smoother construction with perforations along the front half. A slight contrast appears along the collar (not unlike the Knit Runner), while branding is limited to a single mention of Givenchy near the heel.

It’s “Yeezy” to see the similarities — At first glance, the sneaker looks a bit like Kanye West’s Adidas Yeezy line, especially the Knit Runner. But Williams’ design differentiates itself with the sneaker’s soles, or the lack thereof, as the TK360 features a rigid waxed knit sole in lieu of a more traditional one made of rubber. “Show me another knit shoe without a sole,” Williams said in his teaser.

Because the soles are made of such soft materials, it’s hard to say what the cleaning routine and maintenance will look like. The good thing is that the TK360’s sole doesn’t lay completely flat; its curved outsole leaves a big indent at midfoot, making it less susceptible to dirt and the elements.

Givenchy’s Williams-designed TK360 will be available on July 1 through Givenchy’s website and physical stores. Getting a pair will set you back $1,119, but you’ll be getting one of the most unique sneakers on the market.