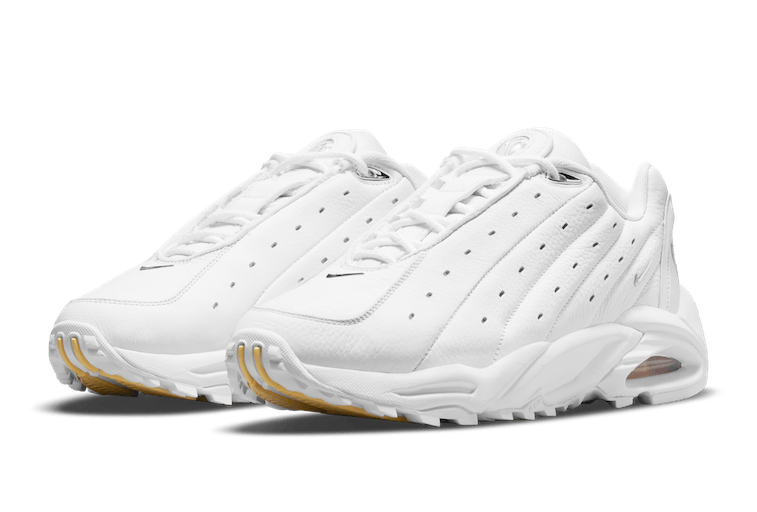 Drake is taking his sweet time releasing NOCTA’s Nike Hot Step Air Terra sneakers. First teased in 2020, the shoes have circulated on social media, in music videos, and seemingly everywhere but retail locations. Now, to pacify (or further aggravate) fans, Drake has dropped a campaign video for the sneakers.

In the 27-second clip, which the Canadian rapper posted on Instagram, a motorcycle can be seen riding around Jamaica dressed in full NOCTA x Nike gear, including variations of the Hot Step Air Terra. Drake captioned the post, “HOT STEP,” while Nike commented, “better late than never,” fueling speculation that the sneakers would finally release.

Worth the wait? — Fans have been waiting on the Hot Step Air Terra shoes for over a year now, and there’s no doubt Certified Lover Boy has inspired more people to drip like Drake. In total, the rapper has teased four pairs of his original sneakers, which aren’t dissimilar to some of Nike’s basketball silhouettes. The kicks feature a bulky upper, exposed Air bubble in the heel, reflective piping across a perforated leather upper, and metallic Swooshes at the toe. Baby blue insoles add a pop of color as the defined midsole and heel overlays give the shoe a textured look.

As of now, an all-white Hot Step Air Terra is Drake’s only sneaker with official imagery, but the rapper has teased more iterations — and other silhouettes — on social media. All-black, black and yellow, and wild snakeskin versions of the Hot Step are anticipated, each of which features reflective detailing. Champagne Papi has also revamped his favorite Nike sneaker, the Air Force 1, adding miniature hearts and a quote to the classic kicks. Yet with no release dates announced for any of the kicks, surrounding hype has begun to phase out.

The lengthy drop schedule mirrors that of Drake's Certified Lover Boy album, which was delayed numerous times and launched a year after it was expected. That being said, supply chain issues could have postponed the Hot Step’s release, especially as Nike has faced a shortage of sneakers due to factory shutdowns.

Just hold on… — Drake’s campaign video, and more notably, Nike’s comment, seems to imply that a launch of NOCTA’s Nike Hot Step Air Terra is imminent, although we’re taking this tease with a grain of salt — the rapper may be loyal to his lovers, but it’s evident the same faithfulness doesn’t apply to his due dates. Should the sneakers actually debut in the coming weeks, you’ll want to look out for pairs on SNKRS, where they’ll retail for $150. Here’s to hoping the wait was worthwhile.