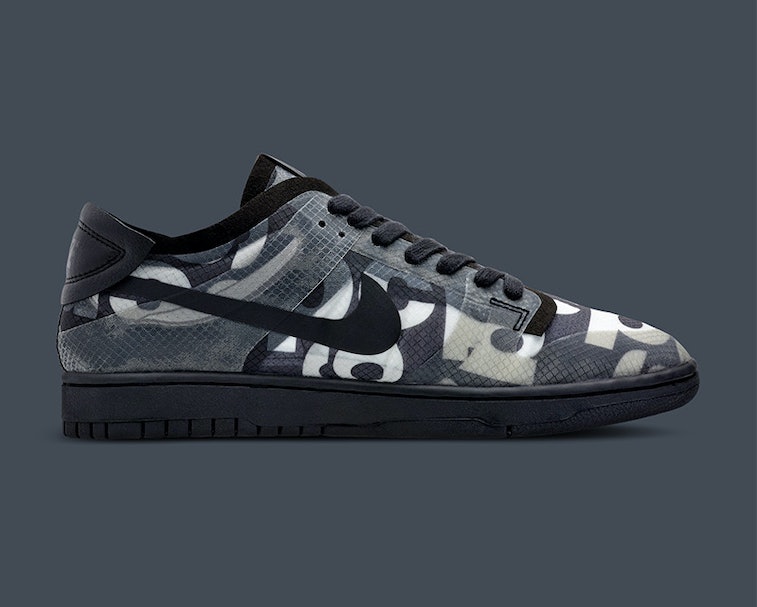 It feels like the aughts again with the Nike SB Dunk a constant in 2020's sneaker releases. The basketball-turned-skateboarding silhouette was a staple for sneakerheads that cut their teeth more than a decade ago, and Nike has brought it back in full force over the past year. Virgil Abloh did a collaboration, the iconic Skunk Dunk got a sequel, and Cactus Plant Flea Market is rumored to have a pair on the works. That's to say nothing about the general releases, which have also been flying.

Now, Comme des Garçons is getting in on the revived trend with a pair of SB Dunk Lows set to release this week. The collaboration first surfaced at CdG's Paris Fashion Week show last fall, and more images have since leaked. But mum has been the word on any official details until today.

The black and white of it — Both exhibit designer Rei Kawakubo's penchant for greyscale, with one adding an all-over print of CdG's monogram. For those who have followed the brand's sneaker collaborations, it's pretty familiar territory. Most of CdG's releases have maintained the same coloring, including collabs with Nike, Converse, New Balance, and Vans.

In this case, the treatment is inspired by the streets of Tokyo, a city that's been crucial to the Dunk's stature. It also carries over clear embellishments from the CdG Dunk High — this time in the form of Nexkin, a translucent stretch-woven fabric that envelops the upper and has previously been seen on Nike's Vaporfly SP and React Element 87. This gives the sneakers the strong sense of texture that Kawakubo has become known for in the 40-plus years since founding Comme des Garçons.

Dropping in unisex — The Dunks are releasing this week through Dover Street Market's online store and, despite rumors of being for women only, will drop in men's and women's sizes. Hypebeast boys may just gobble both up, as they just need to add 1.5 to their own size to find the appropriate fit in women's, providing little resistance.

DSM's webstore, however, is another story. It's notoriously fickle for major releases, and chances are you'll be be left frustrated and empty handed. But hey, don't let that stop you from trying. These Dunks have been a long time coming.